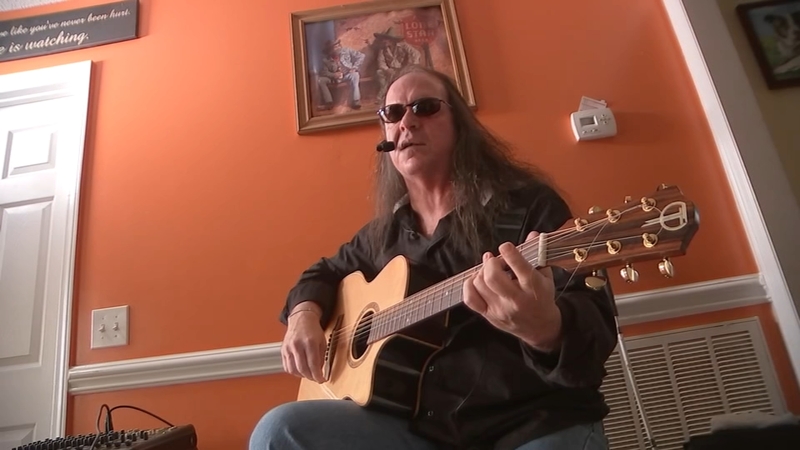 Larry Joe Lambert of Willow Spring has been blind since he was 15 when doctors discovered he had a brain tumor. He learned how to play guitar that year and is now getting ready to release his first southern rock album next summer. @ABC11_WTVD @ABC11Together #ABC11 pic.twitter.com/vTaizRj8Ju

Now, at 56, the Ohio transplant living in Willow Spring is getting ready to release his first original southern rock album with the working title, Southern Belle Scream.

The title track is autobiographical, Lambert said, with the lyrics describing how he left Ohio, "to play my guitar down south and hear those southern belles scream."

In the spring of 1978, Lambert, a standout on his high school baseball team said he started noticing a change in his vision.

"I couldn't hit anything in practice," he said.

A CAT scan revealed the reason for Lambert's severe blurry vision; the high school sophomore had a brain tumor.

"I had a tumor on my brain the size of a large orange or a small grapefruit and that I could possibly die at any moment if it ruptured," he said.

Once the tumor was removed, Lambert turned to the music that got him through his lowest times -- the blended guitar styles of Lynyrd Skynyrd and the Allman Brothers; that's when he was inspired to learn the guitar himself.

"You have to get on top of your disability and you have to master it or it's gonna master you," he said.

Lambert said he learned how to play from musicians who worked in a local music store, imagining the neck of the guitar in his mind, and learning the notes by ear.

After years of practicing and performing with bands in local bars and venues in Ohio, Lambert put aside his dreams of one day releasing his own original album.

In 2014, after his mother died, he decided to give his dream one more chance. He moved down to North Carolina where he's been writing songs and playing local venues ever since, even learning how to hook up his own sound board.

He hopes to inspire others with disabilities, as well as educate sighted people about what visually impaired people are capable of achieving when given the chance.

"My blindness is only an obstacle if I allow it," Lambert said.