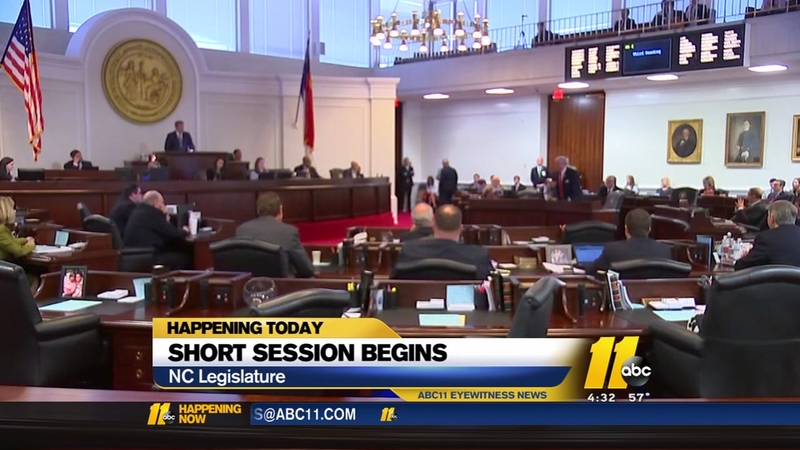 RALEIGH (WTVD) -- There are different views on what will happen during the North Carolina General Assembly's short session which starts Monday.

Some lawmakers believe House Bill 2 will be a focus - others don't. However, they can expect their return to work in Raleigh will be met with controversy.

"The economic impact has been significant and profound and they are likely only going to increase until we can correct this destructive action that we are taking," said Sen. Floyd B. McKissick, (D-Durham)."

Activists and protestors on both sides of the issue will greet lawmakers Monday. Supporters of House Bill 2 will rally behind the Legislative Building.

The Moral Monday Movement will rally against HB2 and hold a mass sit-in inside the General Assembly.

House Bill 2 prevents transgender people from using the restroom they identify with. The bill also blocks people from filing discrimination suits against their employers and prevents local governments from setting minimum wage standards.

Newly sworn-in State Rep. Chris Sgro, who is openly gay, expects the HB2 backlash will be a focus for lawmakers.

"Gov. McCrory, Speaker Moore and Senator Berger are going to be in a position where they have to repeal house bill two in this short session," Rep. Sgro said.

But Republican leaders say the attention will be on the state budget: Increasing wages for teachers and state workers while reforming the tax code. Dallas Woodhouse with the NC GOP says the focus will not on HB2 or the Moral Monday protests.

"If Democrats think their way to victory is to put Rev. Barber out there - who is supposed to be a preacher-jumping up and down screaming-supporting the rights of grown men to go into the girls locker rooms - bring it on," Woodhouse says.