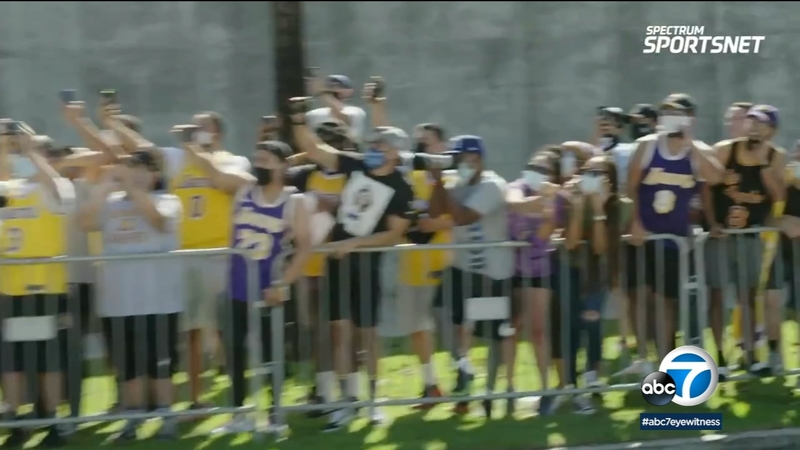 Lakers public celebration on hold due to pandemic

NBA superstar LeBron James, one of President Donald Trump's most outspoken critics in the sports world, took to social media Saturday to celebrate President-elect Joe Biden's projected victory and say he will go to the White House for a visit to celebrate the Los Angeles Lakers' championship.

James tweeted an altered photo of his famous block of Golden State Warriors forward Andre Iguodala during the 2016 NBA Finals. In the picture, Biden's head is superimposed on James' body and Trump is portrayed as Iguodala - an apparent nod to Biden blocking Trump's attempt at a second term as president.

After several days in limbo following Election Day, Biden was characterized as the apparent winner of his home state of Pennsylvania, pushing him over the 270 vote threshold needed to capture the presidency.

RELATED: Joe Biden is the apparent president-elect, vowing new direction for divided US

After nearly 50 years in public life and three tries for the White House, ABC News called the election for Biden, defeating Trump in a victory delayed by vote counts and facing potential legal challenges.

ABC News is characterizing Biden as the apparent winner in Pennsylvania because the vote is very close and has not yet been certified. Pennsylvania's 20 electoral votes, would put him over the required 270 needed to win the White House.

James continued to tweet in celebration of Biden's apparent win. He thanked Philadelphia voters for their role in flipping Pennsylvania back to blue after Trump won the state in 2016, and he re-tweeted a GIF of Trump saying "you're fired" on "The Apprentice."

James won his fourth NBA title with the Lakers this past season and has used his platform to speak out against Trump and social justice issues in the country.

In 2017, James called Trump a "bum" after the president withdrew his White House visit invitation to the Warriors.

Trump was critical of the NBA's restart after the pandemic brought the league's season to a grinding halt. After the season restarted, players knelt during the national anthem and boycotted the playoffs in the wake of the shooting of Jacob Blake in Kenosha, Wisconsin, in August.

Crowds gather outside of the White House after Joe Biden becomes the apparent president-elect.

Also in August, Lebron James and the rest of his Lakers teammates donned Make America Great Again hats with a modified message to shine a light on issues of police brutality and racial justice.

The red hats had the words "Great Again" crossed out to instead form the message "Make America arrest the cops who killed Breonna Taylor."

The caps are one of the many calls for awareness surrounding the death of 26-year-old Taylor, who was killed by police in her Louisville apartment back in March.

Speaking after the game against the Portland Trail Blazers, as reported by ESPN, James said Taylor's case is "something that we continue to put our foot on the gas, continue to pressure."

The red hats had the words "Great Again" crossed out to instead form the message "Make America arrest the cops who killed Breonna Taylor."