Where will Jahmir Smith go? Pretty much anywhere he wants 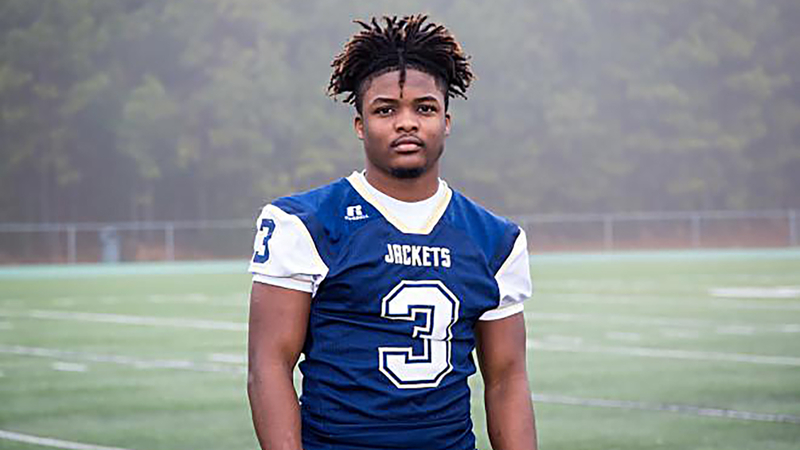 You'd never know he has full access to unlimited bragging rights - more than 2,000 yards rushing last season as a football player, a stratospheric GPA in the classroom and his pick of more than 30 universities, including all eight Ivy League schools and every major program right here in North Carolina.

Smith is only a junior at Lee County High School in Sanford, but the star running back already has more than 30 full-ride, academic and athletic, scholarship offers.

"In total, I have 33 offers. I just got one from Louisville today," Smith said.

At 11: I met the oh so impressive Lee Co. High junior @Jahmir_trapical He has 33 full ride offers from schools, 8 of them Ivy League #ABC11 pic.twitter.com/kbMHz8qSrt

Some of those offers were delivered personally by head coaches at the schools and just today, he said, a coach from Princeton came to watch him practice.

The first offer came in December from East Carolina University.

"After ECU offered, all the other ones started rolling in," Smith said.

It is a blessing to have offers from all 8 Ivy League colleges, but I earned it through hard work in the classroom not only on the field.

"I really didn't think it would happen," said Smith, sitting in his living room with his box full of offers and letters from coaches beside him.

SELF-STARTER WAS ALWAYS SERIOUS ABOUT HIS GRADES

The star runner said he didn't start playing football until the eighth grade, and for him, school work always comes first. Smith said he really enjoys math and science.

His mother, Monique McLean, describes him as a self-starter. She said he's always been serious about his grades, and it shows. She said when Jahmir was growing up, schools wanted to skip him ahead a grade -- not once, but twice.

Smith has a 4.43 GPA and already has more than enough credits to graduate high school early and take any one of those 33 offers right now.

"To get the GPA, you have to have high-level courses and time management," said Smith, who is taking all honor classes.

Smith said he wants to take the time to consider his many options and have a senior year at Lee County High School.

"It gets overwhelming but I'm handling it," said Smith.

A ROLE MODEL AND MAN OF HIS WORD

He and his mother said they are especially thankful for all the guidance from Smith's coach at Lee County High, Foster Cates. They describe Cates as a second father to Smith and are grateful to have him in their lives.

Outside of studying and playing ball, his mother said he's a role model to his 8-year-old brother and other small children. She said he's constantly being asked to mentor youngsters.

Monique McLean has a wall full of only some of the athletic and academic awards he's won through the years.

On Saturday, his mom said he's being added to the record book for the North Carolina High School Athletic Association for his stats this past season, when he ran for 2,130 yards and 41 touchdowns for the Yellow Jackets.

There will be a ceremony for that, but Smith won't be there - he said he already promised his girlfriend he'd take her to the prom, so he's going to keep his word.

As for which school is standing out the most for him right now, Smith said he has no idea. He's already visited nine campuses but has more to go. He has started thinking about his career path and said he's thinking about becoming an anesthesiologist.

Until then, Smith and his mother said spring training starts next week and they know coaches from all over will be on the sidelines watching and hoping to one day have Smith on their team - and in their classrooms.
Report a correction or typo
Related topics:
sportssanfordscholarshipathleteslee county newscollegecool kidsschool athleticshigh school footballgood newsfeel good
Copyright © 2022 WTVD-TV. All Rights Reserved.
TOP STORIES
Snow, sleet, freezing rain expected again this week
NC legislature votes to further delay primaries until June 7
Third arrest made in Black Friday shooting at Streets at Southpoint
Daniel Turcios shot 5 times after crash on I-440, RPD reports
'He was special': Durham friends remember Andre Leon Talley
'We can't get any more': Store struggles to restock shelves
Victim in fatal I-85 crash was just 3 months old
Show More
19-year-old charged in wreck that left 2 Marines dead
Earnhardt Jr. to be inducted into NASCAR Hall of Fame
Raleigh man feels lucky to be alive after bullet found above his bed
2-year-old accidentally shot himself in Harnett County
Biden, 1 year in, says nation weary from COVID but in a better place
More TOP STORIES News