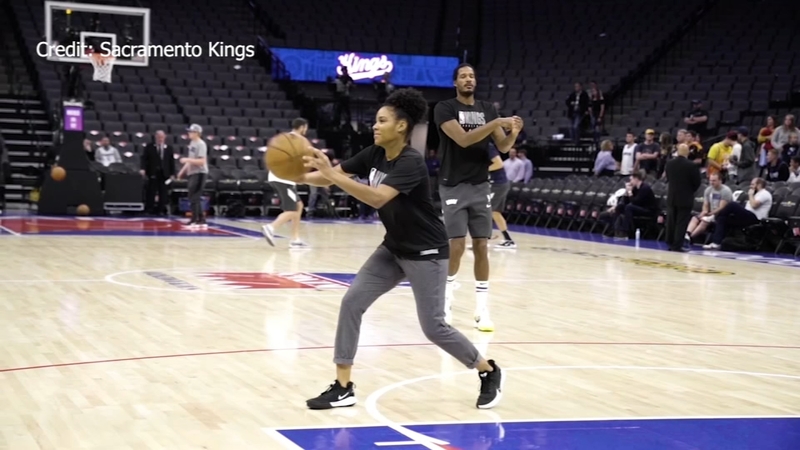 DURHAM, N.C. (WTVD) -- The NHL is the first sports league to put an active plan in place for when sports can safely resume, deciding to end the regular season and go straight to playoffs in two hub cities. Now the question is, what will the NBA do?

Lindsey Harding, a former Duke basketball standout who is now on the coaching staff of the Sacramento Kings, said she is preparing for everything.

Back in March, Harding, the Kings' player development coach, was in the midst of helping her team fight for a playoff spot.

"It's funny we were sitting in the locker room for like 45 minutes; like they said, postponed, but we didn't know if it was going to go on that day," she said. "We had no idea until everyone was like, the season is postponed just go home. We weren't sure, we were working out some of the guys cautiously, as much as possible, for almost a week until we realized it was postponed indefinitely. A lot of our players went home, a lot of our coaches that are close kind of went home and it's kind of a wait and see right now."

The former Blue Devils star was the first overall pick in the 2007 WNBA Draft. Harding's life has been all about basketball, but the COVID-19 pandemic has provided her with another opportunity.

"I've never really had this time," she said. "I do a lot of self-reflecting; I do a lot of meditating; I go out in nature. I just kind of stop and sit still because I've always been in motion. I do miss basketball, of course, I do miss these things, but I want to make the most out of it because I know we will never get this again."

Harding said that while she misses the day-to-day grind of being a coach, she has loved this time, and it's given her a chance to reflect on who she is off the court.

"I think we always define ourselves with our career and what we've done and what we've accomplished and now it's kind of stripped away now who are you?" she said. "I've had a chance to really look inside and get a lot of clarity. It's been a great growth for me. As far as the coaching goes, it doesn't go away. We've had a lot of meetings, looking towards the future."

Harding hopes the season can resume when it's safe to do so but meanwhile, she continues to check in with players and said that the most important thing is the health and safety of their families

"I know it's been tough, and a lot of people have been wanting to be out and do things," she said. "I know it's tough but if we can all work together, hopefully, we can rid this awful disease."
Report a correction or typo
Related topics:
sportsdurhamwomen athletesnbacoronavirussacramento kingsduke blue devilscovid 19 pandemic
Copyright © 2021 WTVD-TV. All Rights Reserved.
TOP STORIES
Body found on I-85 exit ramp identified; suspect arrested
1 dead, several injured in Friday morning crash on I-40
LATEST: Nearly 2,000 COVID-19 cases reported Friday
Untreatable 'superbug' fungus has spread in 2 US cities, officials say
Texas begins jailing border crossers on trespassing charges
Meet the duo turning heads on the streets of Durham
Show More
'Indians' no more: Cleveland finds new name for baseball team
Chef Mario Batali, partner to pay $600K in sex harassment settlement
Morgan Wallen speaks out on using a racial slur in 'GMA' interview
UNC, Duke to mandate COVID-19 vaccines for healthcare workers
Cary student earns perfect ACT score
More TOP STORIES News