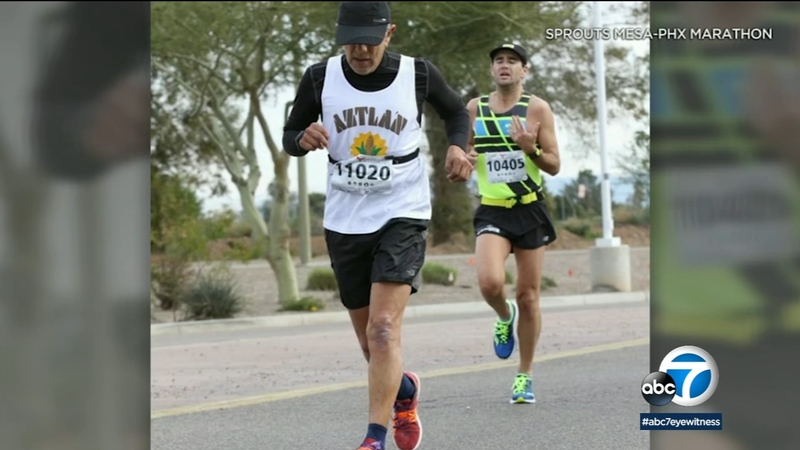 LOS ANGELES -- The disqualification of a 70-year-old runner who set a record time for his age group in the Los Angeles Marathon is now sending shock waves through the running community.

Retired Dr. Frank Meza finished the marathon with an official time of 2:53:10 - setting a record for his age group. The next person behind him in the group finished with a time of 4:10:07.

The performance was astonishing - so much that marathon investigator Derek Murphy took a closer look. He says he found video that shows Meza leaving the course.

"What you see is he comes onto the course after being along the sidewalk for an unknown period of time," Murphy said. "I looked back 6 minutes (on the video) and he was never on the portion of the course leading up to the sidewalk so it showed me he didn't run that full part of the course."

The marathon disqualified Meza for alleged cheating and awarded the win for the age group to the second finisher.

Still, Meza has his supporters in the running community.

"Until I get more deeper understanding I support Frank," said Jose Zavala, head of Aztlan Athletics.

He says he's not yet convinced Meza cheated.

"Based on when I see him running on the trails, based on his training - he's fit, he's in incredible shape."

Meza's team issued a statement saying in part: "In due time he will set the record straight and address all of the allegations. Now it's just not the right time."

But Meza's other marathon times are now under scrutiny, including the 2019 Sprouts Mesa-Phoenix Marathon. Organizers are now investigating his finish time. Their statement reads in part:

"The Sprouts Mesa-Phx Marathon will take swift and necessary action following the conclusion of our investigation. We are very serious about doing our part to ensure the integrity of our sport."