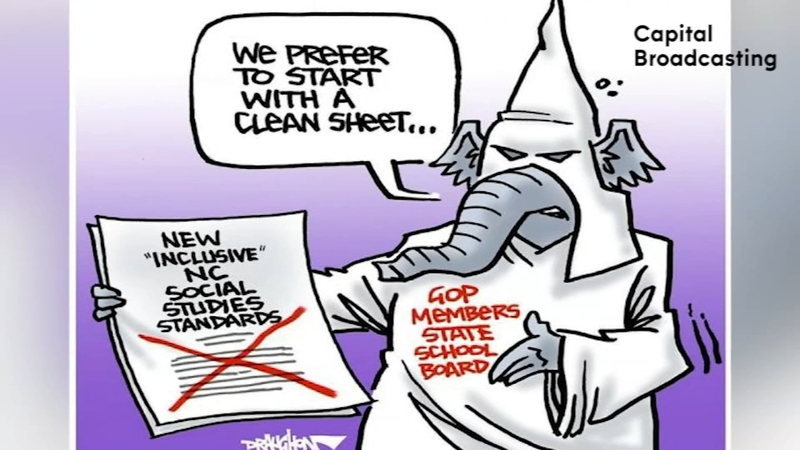 RALEIGH, N.C. (WTVD) -- On this second day of Black History Month, an editorial cartoon published on WRAL.com, owned by Capitol Broadcasting, had Lt. Gov. Mark Robinson so upset he called a news conference.

The cartoon by Dennis Draughon stems from the state board of education's upcoming meeting regarding K-12 social studies curriculum.

Last week, members of the North Carolina Board of Education discussed whether the concepts of systemic racism, systemic discrimination and gender identity should be discussed in class.

Robinson, a Republican who made history as the first Black man to hold the office, took a strong position against it.

The cartoon published this week shows the Elephant Klansman representing GOP board members who are against the use of those words.

The elephant's caption reads: "We prefer a clean sheet."

Robinson is also accusing Capitol Broadcasting of bucking its own diversity and inclusion standards. He called the hypocrisy mindnumbing.

During the weekend, the North Carolina National Association for the Advancement of Colored People (NAACP) president the Rev. T. Anthony Spearman rallied for board members to include the words in the curriculum.

But Robinson said we should be teaching history and the horrible things that took place from a victorious perspective.

But as Robinson slammed Capitol Broadcasting, he again was questioned about his own controversial private Facebook posts that went viral last year, as he ran for office.

In previous interviews, Robinson has refused to apologize or walk back those posts, saying instead that he is not ashamed of them.

"When I made those posts as a private citizen, I was speaking directly to issues that I'm passionate about. But as a public servant -- and I said this to you -- as a public servant, I have to put those opinions behind me and do what's right for everyone in North Carolina," Robinson said.

Capitol Broadcasting's opinion editor Seth Effron released a statement in response to the controversy:
"Editorial cartoons are creative and provocative, using hyperbole and satire. No one believes Republicans on the State Board of Education are members of the Ku Klux Klan. The editorial cartoon by Dennis Draughon is meant to point out that these members of the State Board are trying to wipe out from the social studies curriculum the record of racism which includes the Klan and the segregationist practices that were imposed in our state and nation's history."

Robinson does not want the state school board to make a decision this week on the social studies standards. He said the topic is too divisive and more time is needed to speak to people on both sides of the issue.