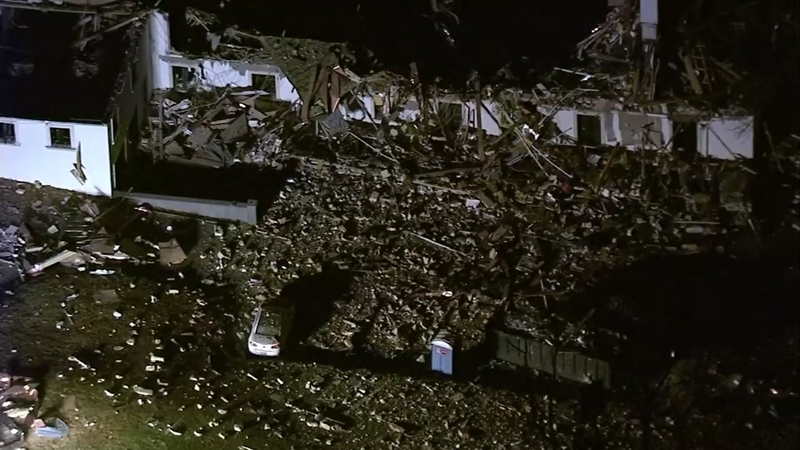 "Our whole house shook, we're about a mile or two up the road. We didn't know what it was, some kind of explosion," said one neighbor who heard the blast.

The explosion, which officials say a gas leak caused, happened just after 8 p.m. on the 600 block of Dodds Lane. Officials said about 75 percent of the home was destroyed in the blast.

After the blast, WPVI received calls from as far away as 20 miles away in South Jersey reporting a large boom and shaken houses. The sound of the blast was captured on a nearby security camera.

"It sounded like the biggest bomb I'd seen in my life. It was just so loud. And the concussion was so great; the whole house shook," another neighbor said.

Debris rocketed into nearby trees and was left hanging from branches.

No one was inside the home at the time as the family was staying in a carriage house on the property. They were among the many to call 911.

First responders rushed to the scene.

The call on police radio came in as, "Large single family dwelling that's exploded. All occupants accounted for at this time."

The dwelling, a six-bedroom, expansive home, was under construction.

"The information we have at this point is the house is under extensive renovations, a substantial portion of the single family residence has been leveled and we have assistance from ATF and State Fire Marshal," said Lower Merion Township Police Superintendent Michael J. McGrath.

The home was last purchased in 2007 for $3.4 million and has been on and off the market.

It was most recently listed for sale earlier this year for $1.8 million.

Chopper 6 flies over the scene of a house explosion in Gladwyne.