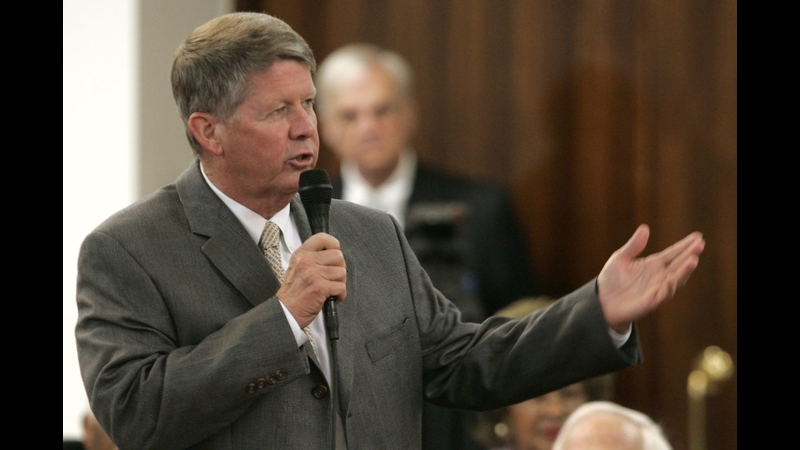 Basnight, who was ill for years with what was later diagnosed as amyotrophic lateral sclerosis, died at his Manteo home with family members present, according to Amy Fulk, Basnight's chief of staff while he held the chamber's top job.

"North Carolina lost a giant today with the passing of my friend, Senator Marc Basnight," Gov. Roy Cooper said. "His positive influence on our public universities, transportation, environment and more will be felt for decades. A man of great power and influence, his humble, common touch made everyone he met feel special, whether pouring them a glass of tea in his restaurant or sharing a pack of nabs at a country store. He believed in North Carolina and its people, and our state is stronger because of him. Our prayers are with Vicki, Caroline and the whole family."

Despite humble beginnings and little formal education, Basnight rose through state politics to serve in the Senate for 26 years. His nine two-year terms as Senate president pro tempore made him the longest-serving head of a legislative body in North Carolina history.

Basnight was a legislative powerhouse involved in enacting every significant state policy of the 1990s and 2000s, including passage of the state lottery, a ban on smoking in restaurants and bars and improved public education and ethics reforms. And he made it a point of stopping to meet constituents on his weekly 190-mile commute to Raleigh to learn about their needs.

Basnight who was from Manteo, was Senate leader from 1993 until 2010 when Republicans gained control of the Senate.

"Sen. Basnight and the institution of the Senate are in many ways inseparable. He left his mark on the body, and therefore the state, over his nearly two decades of leadership," current Senate Leader Phil Berger, R-Rockingham, said. "Sen. Basnight loved people. I used to hear that he'd stop along the way from the Outer Banks to Raleigh just to speak to strangers and hear what they had to say. He loved people, and they loved him back. I will always remember the grace with which Sen. Basnight conducted the 2011 transition. He spared no effort and denied no request. He could wage political battle with the best of them, but he always put the institution of the Senate, as a symbol of the people's representative government, first. He's one of a kind, and I will miss him."

He represented the 1st Senate District from 1984 through his resignation just before the start of what would have been his 14th term in 2011.

He resigned his seat in early 2011, weeks before Republicans took over the chamber for the first time in over a century due to electoral wins the previous November. Basnight told reporters at the time that he was already struggling with a degenerative nerve disease that affected his balance and speech.

Democrats who served and learned as lieutenants under Basnight in the Senate are numerous and included a future governor, Beverly Perdue; the late U.S. Sen. Kay Hagan; and Cooper, who was Senate majority leader in the late 1990s.

"The NCDP and I are deeply sorry to hear of the passing of Senator Marc Basnight who faithfully served North Carolina in the State Senate for more than a quarter-century," North Carolina Democratic Party Chairman Wayne Goodwin said. "He was an incredible fighter for everyday North Carolinians and was known far and wide as a reliable problem solver. As someone who served with him in the legislature, I witnessed firsthand not only Senator Basnight's advocacy for eastern and coastal North Carolina, but also how he helped every region of the State with his masterful, tireless, passionate leadership for investments in public schools, North Carolina's public universities, conservation of our natural resources, and transportation infrastructure. His strong voice, insatiable curiosity, and his continued leadership will be greatly missed. We have lost a great friend of North Carolina, a friend whose legacy we must carry on for generations to come."

The Manteo sewer contractor arrived in state government in 1977 with little other than a high school diploma and his distinctive Outer Banks accent. Then-Gov. Jim Hunt appointed him to the Board of Transportation. Basnight succeeded his uncle as a senator seven years later.

Basnight was an effective board member and senator for his district, and became a voracious reader, turning himself into an authority on the state's environment and the University of North Carolina system. Basnight rose to a co-chairmanship of the appropriations committee and won the president pro tempore's job in 1993.

"Marc Basnight exemplified the meaning of leadership. He was a great leader and deeply cared about the people of North Carolina," North Carolina Insurance Commissioner Mike Causey, a Republican.

For several election cycles. the Dare County Democrat and his allies extended his party's majority in the Senate even as North Carolina evolved further into a two-party state. They won through a highly professional campaign and fundraising operation and an agenda emphasizing North Carolina's high-tech future even as traditional textiles and tobacco faded.

House Speaker Tim Moore, R-Cleveland, said: "Sen. Basnight was a leader who cared deeply about serving his constituents to make a difference in the lives of all North Carolinians. Our thoughts are with his family as they honor his memory and we remember his lasting impact on this state."

Sen. Richard Burr, R-N.C., called Basnight one of the "the most effective and influential political leaders in North Carolina's history."

"Marc was a powerful man, but everything he did was driven by a deep and genuine love of people that was evident to all," Burr said. "I always considered him to be one of my best friends. He will be missed."

Though he never attended college himself, Basnight made it a mission to keep the UNC system a national leader in higher education. Basnight was perhaps proudest of the passage of a $3.1 billion higher education bond package in 2000 that was approved later that year in a statewide referendum.

While Senate leader, GOP senators complained Basnight had consolidated too much power. But members of both parties said his embrace of the average person and loyalty to the Senate were unquestioned.

"I am very saddened to learn of Marc Basnight's passing," said Republican Congressman David Rouzer, who represents North Carolina's 7th District. "As president pro tempore of the N.C. Senate and a member of the opposite party, he was a fierce opponent. But he was also a friend and a good man who contributed much to North Carolina. I extend my sincere condolences to his family and other loved ones."

After Basnight left office, his family still operated the Lone Cedar Cafe on the Outer Banks. The new bridge over Oregon Inlet, connecting Hatteras Island to the Outer Banks mainland, was named for him.

"He's done so many remarkable things that are here forever," longtime North Carolina political consultant John Davis said a decade ago as Basnight departed the Senate.

His wife, Sandy, died in 2007 after being treated for leukemia. His survivors include two daughters, Vicki and Caroline, and grandchildren. Funeral arrangements were incomplete late Monday. A memorial service will be held later.

Basnight's death marks the passing of another heavyweight in state Democratic politics during 2020. Former Lt. Gov. Bob Jordan died in February, while Sen. Tony Rand, who was majority leader and rules committee chairman under Basnight, died in May.