Martin Luther King Jr. is focus of many sermons hours before his holiday 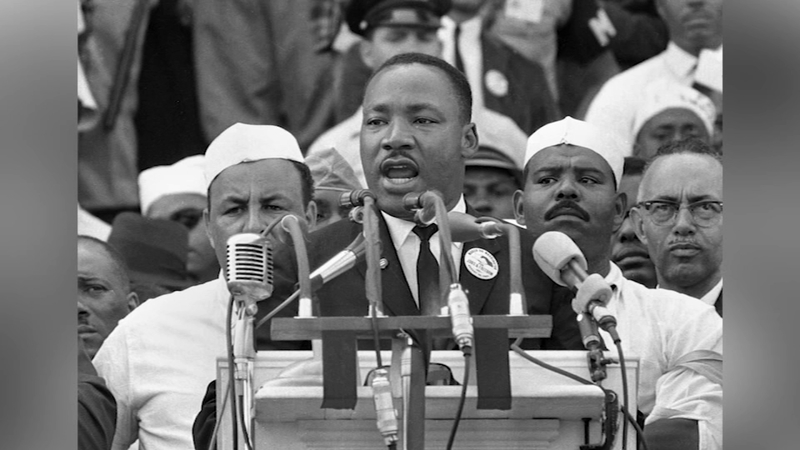 DURHAM, N.C. (WTVD) -- The first Martin Luther King Jr. holiday weekend since the pandemic meant a continuation of virtual church services. Faith leaders across the nation shared messages of appreciation like the one delivered by Jay Augustine, senior pastor of St. Joseph AME Church in Durham.

"It is amazing when we think about how far we have come since March of 1965 when the Bloody Sunday march occurred through August of that year, when the Voting Rights Act was signed into law," he said, and praised Dr. King for pushing America past some of the blatant restrictive laws and customs that denied African Americans access to voting booths.

"He was a non-violent person and he advocated non-violence," said Pastor Augustine. "I'm almost sure he's turning over in his grave, given the things that happened in the Capitol on January the 6th."

He referenced the chaos that prevailed for hours that day, as rioters forced their way into places where the nation's lawmakers managed to find shelter, out of harm's way.

That's why his message from the pulpit addressed the nation's challenges, moving forward.

"An open letter to Dr. King rather than a typical sermon. Where we will talk about how his dream is coming to fruition," he said, "But we also will talk about how, over the course of the last four years, we've fallen asleep and that dream certainly has gotten off track. January the 20th will mark a new beginning in our country's history. It's a new opportunity to bring to fruition many of the things he fought for and quite frankly, gave his life for. And that means an inclusive society where everyone is welcome at the table."
Report a correction or typo
Related topics:
societyncdurhamreligionchurchpoliticsmartin luther king jr
Copyright © 2021 WTVD-TV. All Rights Reserved.
MARTIN LUTHER KING JR
Former Neo-Nazi removes swastika tattoos
Listen: 'I Have A Dream' speech first given in North Carolina
'I Am A Man': Story behind Historic Clayborn Temple, iconic civil rights haven
How this Georgia leader sees the future of the civil rights movement
TOP STORIES
LATEST: Gov. Cooper, Cohen urge vaccinations, booster shots
Sec. Mandy Cohen, who led state's COVID-19 response, to step down
Duke economists urge calm amid rising inflation
Chris Cuomo suspended from CNN after AG releases documents
Authorities: Student kills 3, wounds 8 at Michigan school
Lawsuit alleges mass sexual abuse at NC School of the Arts
Show More
Actors honored for rescuing 14-year-old trapped under SUV in NYC
Duke professor highlights importance of global vaccine equity
Arbery case: Black men feel under suspicion for being Black
Memorial grows where 15-year-old Fayetteville teen was gunned down
FDA health panel endorses Merck COVID-19 pill
More TOP STORIES News