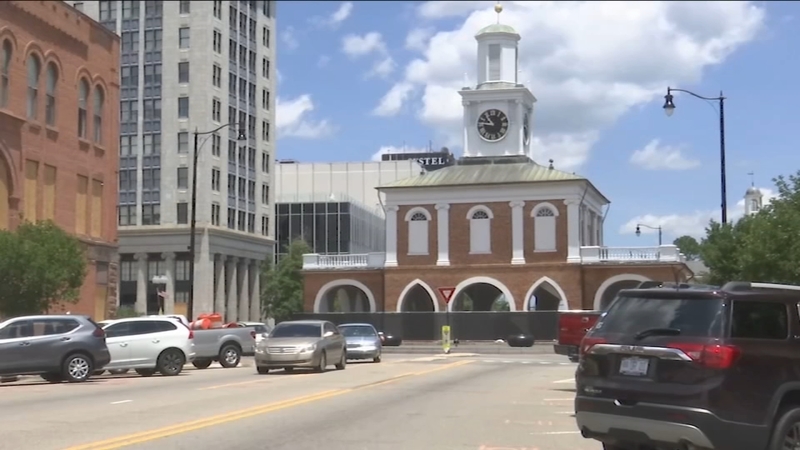 FAYETTEVILLE, N.C. (WTVD) -- George Floyd's death spurred global demonstrations, police reform and tough conversations on racial injustice. In Fayetteville, conversations have continued around the Market House and if it should remain as the city's logo.

On Monday, Fayetteville City Council decided that the answer is 'no.'

The council voted unanimously to move forward with removing the controversial imagery from city property.

#NEW: @CityOfFayNC is looking to finish what they started in 2015. This evening, during a special meeting, they voted unanimously to move forward to remove the #MarketHouse from all affiliations with the city. They'll have staff look at the logistics: cost, method. @ABC11_WTVD pic.twitter.com/0Zt9aFsgyH

Also this week, "End Racism Now" and "Black Lives Do Matter" are being painted around the building.
EMBED More News Videos

Last week, Mayor Mitch Colvin submitted a request to remove the Market House from any affiliation with the city. He said in 2015 city council voted to stop using the Market House as a logo but stopped short of removing it altogether.

The Market House is displayed on the city's flag, seal, trash cans and a number of other things.

"Any time the state of Mississippi says they're going to change their state flag, which has a part of the confederate flag on it, because of the race sensitivity, that says something. So, Fayetteville cannot allow our opportunity to do that," said Mayor Mitch Colvin.

The unanimous decision now leaves the city with choosing how they want to get that done and at what cost to the taxpayer.
"It's contentious. It's a sign of division and I don't think it should be a part of the city's operation," said Mayor Mitch Colvin.

Some say it has plenty of historical significance as it sits in the heart of downtown Fayetteville. Opponents have argued that the establishment is a painful reminder of the many families that were destroyed there.

"Really, to me, we can't afford not to do it, because we can't have community and its government pulled into a racial discussion," said Colvin.

This means the logo would be taken off the city flag, trash cans, and seal.

Colvin told ABC11 his grandmother's grandfather was a slave who was sold at the Market House many years ago.

"This is not about black people or white people. We are one of the most diverse cities in the country and we have about a 50/50 population of black, white and other. We need to be very thoughtful in making sure it's a decision that won't tear us apart," said Colvin. "Other communities have successfully pulled it off. In Alabama, there's a lynching museum which is a horrific time in American history, but it's very popular today. How did they do it? Who did they get to help pull it off? That's what we need to ask."
Report a correction or typo
Related topics:
societyfayettevillecumberland countyrace relationsslaveryfayetteville newsfayettevillecumberland county newsrace in america
Copyright © 2022 WTVD-TV. All Rights Reserved.
TOP STORIES
10 killed in Buffalo supermarket attack police call hate crime
Historic Durham high school celebrates centennial
Buffalo, NY shooting suspect may have planned attack months before
A total blood moon eclipse is happening this weekend: How to watch
Record 19,513 fans pack PNC Arena for Hurricanes Game 7
Russians stymied in Ukraine; Finland favors joining NATO
Milk banks interest spike as baby formula shortage continues
Show More
Ukraine: Russians withdraw from around Kharkiv, batter east
Carolina Hurricanes beat the Boston Bruins 3-2 in game 7
Family of man shot, killed by Raleigh police speaks out
Shootings leave 21 injured near NBA gatherings, prompting curfew
Grassroots efforts pay off with decreasing COVID deaths in minorities
More TOP STORIES News