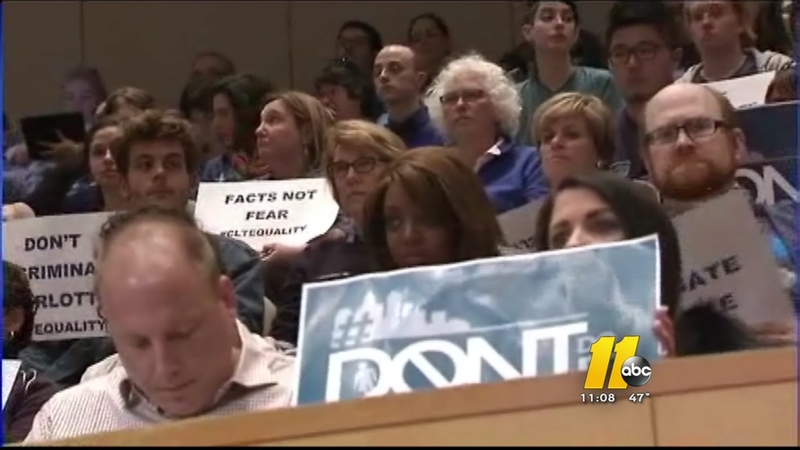 And the Charlotte City Council did indeed pass the ordinance, by a 7-4 vote Monday night.

The deadline expired Friday for anyone who wants to speak Monday ahead of the controversial vote for Charlotte's non-discrimination ordinance.

Supporters of the non-discrimination ordinance delivered letters signed by members of the faith and business community to city hall Monday morning, all while opponents boasted their side over the loudspeaker just outside.

The ordinance would give members of the LGBT community recourse if they feel they are denied rights, including the right of what restroom to choose.

"The only issue I think the state needs to be involved in is the issue regarding locker rooms and restrooms, that's the one that draws concern that has ramifications beyond city limits," McCrory said.

The ACLU was pleased with the outcome.

"With this vote, North Carolina's largest city has affirmed that all people deserve to be treated fairly and protected by the law," said Sarah Preston, acting Executive Director of the American Civil Liberties Union of North Carolina. "When a business decides to open its doors to the public, it should be open to everyone on the same terms. We applaud Charlotte's council members for making their city more safe, welcoming, and inclusive, and we urge municipal leaders across the state to follow their example. Charlotte has full authority to enact this ordinance, and we hope the General Assembly will respect this local government's decision to protect its residents and visitors from discrimination."

So many speakers signed up to talk to Charlotte City Council that the time limit for each person to speak was 1 minute, rather than the normal 3 minutes. For several hours people of all races, faiths, ages and backgrounds spoke out either in support of the ordinance or against.
Business owner Juli Ghazi, of Plaza Midwood restaurant Pure Pizza, was No. 17 on the list, and planned to speak in favor of the ordinance.

Ghazi's restaurant has a restroom designated for all genders, a move she adopted after city council voted it down last year.

"What it is, in reality is a place where people go in, they go in the stalls, they lock the door, they use the bathroom, they wash their hands, they leave, that's it," she said.

"That's what the opposition is talking about so much is the fear of the what ifs. What I hope to communicate is the fact I actually get to speak from experience."

So far, nearly 12,000 people signed an online petition concerned the ordinance would burden small business owners and put women and children in bathrooms at risk.

"It's very unfortunate because it's a myth," said Devin Lentz, a Raleigh resident and transgender woman. "The idea that it's a danger or that it's something people need to worry about because it poses a threat is, it's just not true."

Lentz, who runs a support group for the transgender community, said the real danger is to them when it comes to bathrooms.

"If you take a transgender woman and force her to go into the men's room, which appears to be what the governor wants to do, what you're going to do is put her in danger, she's much more likely to be assaulted and harassed," Lentz said. "Transgender people, especially transgender women are assaulted, harassed, raped, murdered at really heartbreaking levels."

People against the ordinance rallied Monday afternoon in front of the Government Center. The "Don't Do It Charlotte" coalition of pastors, community members and others gathered at 4:45 p.m.

"Thank you for your inquiry. Although I have made a point as the former 14 year Mayor and current Governor to stay out of specific issues being voted on by the Charlotte City Council, the item of changing basic long-established values and norms of access to public restrooms is misguided and has major statewide ramifications.

It is not only the citizens of Charlotte that will be impacted by changing basic restroom and locker room norms but also citizens from across our state and nation who visit and work in Charlotte. This shift in policy could also create major public safety issues by putting citizens in possible danger from deviant actions by individuals taking improper advantage of a bad policy.

Also, this action of allowing a person with male anatomy, for example, to use a female restroom or locker room will most likely cause immediate State legislative intervention which I would support as governor. This action also puts an unneeded strain on the relationship between the City of Charlotte and the State of North Carolina.

I encourage you to convince your colleagues to focus on issues most important to our citizens and this proposed change is not one of them. In fact, the City of Charlotte is causing more problems by trying to solve a problem that does not exist."