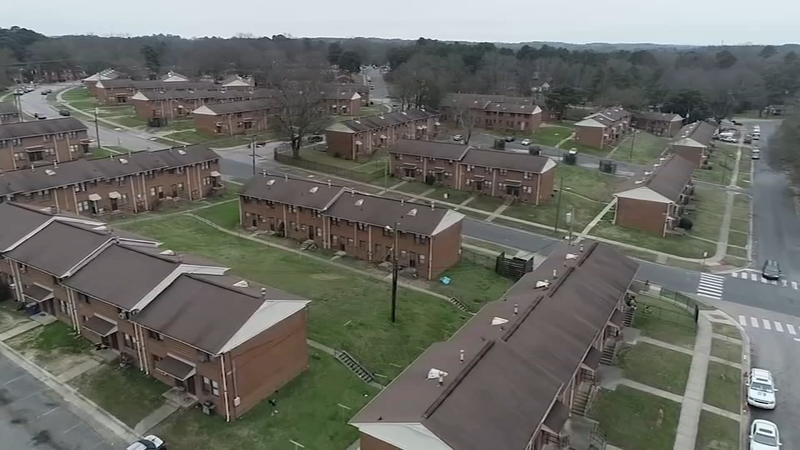 DURHAM, N.C. (WTVD) -- ABC11 returned to Durham's McDougald Terrace Public Housing Complex after the carbon monoxide crisis upended the lives of hundreds of residents. Now one year later, there are many improvements, along with persistent problems, that residents say still plague the housing project.

Brittney Lee first spoke to ABC11 on Jan. 3, 2020, a cold and rainy night when the carbon monoxide emergency turned into a full-blown crisis; McDougald Terrace was being evacuated. She was six months pregnant at the time and scrambling to get her family out.

"It's disturbing," Lee said then. "I'm definitely going to evacuate."

A year after carbon monoxide crisis at McDougald Terrace, 10-year-old boy reflects on how it impacted his year

Now 369 days later, Lee used her cell phone to show us what her unit at McDougald looks like. Her family was finally able to move back inside last April after spending three months at a Durham hotel.

"I absolutely have not had the chance to process all that has happened," said Lee. "And now we're right back at that one-year mark. It's been a lot."

But there has been good news. Lee safely delivered her baby Keenan, who is nine-months-old. She's also happy with some improvements to the units; lead paint has been removed and faulty appliances which once leaked dangerously-high levels of CO are now gone.

'We're trying to make the best of it': McDougald Terrace residents deal with the stress of not being at home during the COVID-19 crisis

But Lee says many promises have gone un-kept. She says her requests to fix pipes that leak from her upstairs bathroom down into her kitchen cooking area have gone ignored.

"There's also the fact that we were told that we were going to have an all-electrical apartment, but it's not so. We're still cooking on a gas stove. I'm not comfortable using gas appliances here anymore," said Lee.

Despite the carbon monoxide crisis, evacuation and repairs, Durham’s McDougald Terrace housing complex was not federally inspected at all in 2020. Residents returned but the pandemic ensured the persistent problems remained.
TONIGHT AT 6 #abc11 pic.twitter.com/v0bTVPvx52

In the throes of the crisis, DHA contractors worked to replace dozens of faulty gas appliances with new electric versions. But DHA CEO Anthony Scott says the COVID-19 pandemic halted the process.

"We shifted the focused to getting everyone home and out of hotels," Scott said. "We intend to complete the additional electrical installation when it is deemed safer to do so. At this time we will wait until the pandemic has subsided and families are in less danger of contracting COVID-19."

In an exclusive interview, last winter, amid the CO crisis, Ben Carson, U.S. Secretary of Housing and Urban Development, who oversees Durham Housing Authority, told ABC11 the responsibility for safety lies at the local level, at DHA -- that monitoring all things all the time was impossible.

"Certainly every time I have found out about things, something has been done about it," said Carson.

HUD's Real Estate Assessment Center or REAC conducts physical inspections to ensure safety, sanitation, repairs are up to federal standards. The highest score is 100. Anything below 60 is failing.

"Proof is in the pudding. I think you will see significant changes with our new REAC system. It's being modernized and it's going to be able to respond faster than it has in the past."

Yet, almost a year since ABC11's interview with Carson it's unknown how or if those "significant changes" to HUD's REAC inspection system improved conditions at McDougald. Because even after the crisis, the evacuations, and the repairs, HUD did not inspect McDougald at all in 2020.

Scott insists the complex was slated to be federally inspected last year, but was postponed because of new pandemic protocols. He did not provide a possible date for a future inspection.

Lee is past tired of waiting. She's now plotting her family's escape.