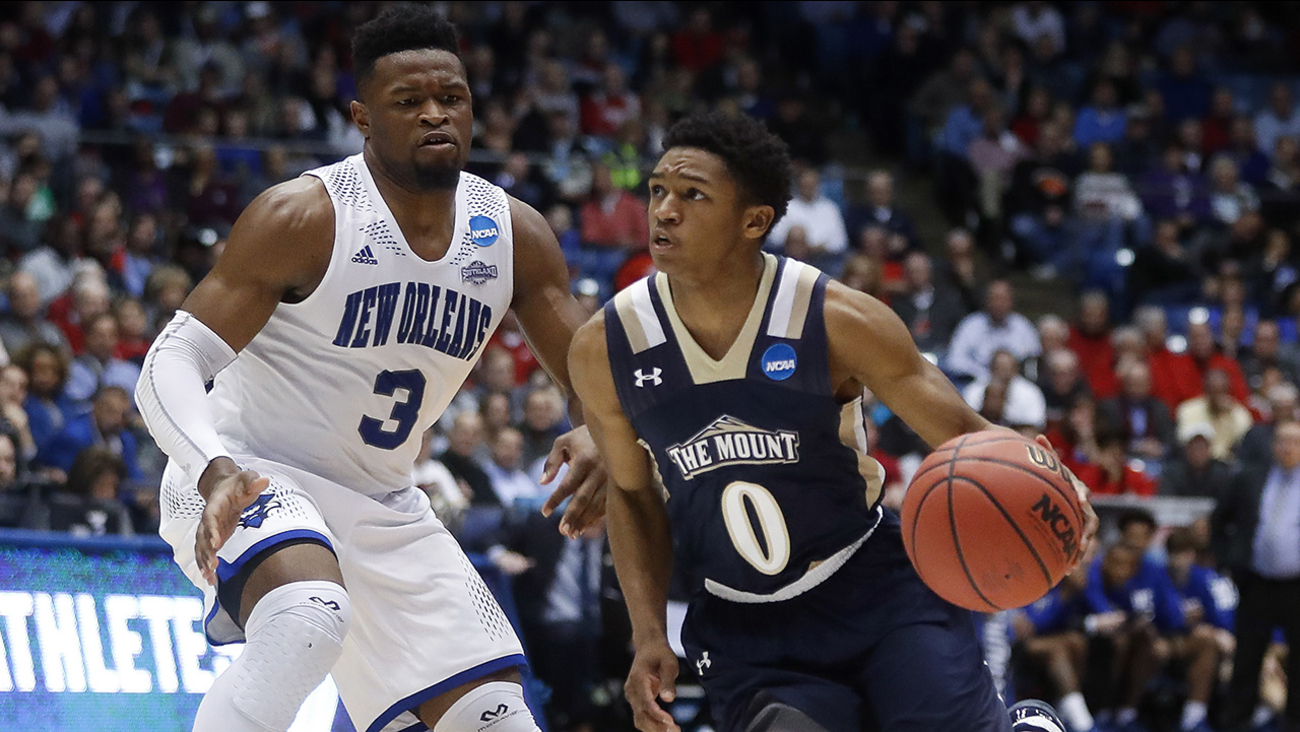 Mebane's own Junior Robinson led Mount St. Mary's with 23 points in a win over New Orleans to open the 2017 NCAA tournament. (John Minchillo)

DAYTON, Ohio -- Diminutive point guard Junior Robinson fearlessly dribbled into the heart of New Orleans' defense, pulled up and hit yet another of his oh-so-soft jumpers. This one decided a frenetic opening game for the NCAA tournament.

The smallest player in Division I scored 23 points Tuesday night, including that go-ahead jumper with 1:27 to play, and Mount St. Mary's held on for a 67-66 victory over New Orleans in the First Four.

Robinson, who played high school ball for Eastern Alamance in Mebane, North Carolina, carried the Mountaineers (20-15) to only their second NCAA tournament win, making jumpers with so much arc they appeared to tease the ceiling.

"The way he plays out there - his speed, his athleticism - it's just so special," coach Jamion Christian said. "When you're a smaller guy, you're naturally going to have a chip on your shoulder and you want to go out there and show the world the things you can do."

The Mountaineers will head to Buffalo to play defending national champion and top overall seed Villanova in the East Regional on Thursday. They had a charter flight waiting after the game.

"It's a dream come true," guard Elijah Long said. "But this is March Madness, and this is part of the madness."

Mount St. Mary's led most of the way, but New Orleans (20-12) pulled off a comeback befitting its resurgent season. The Privateers had a chance for a final shot, but Erik Thomas' inbound pass with 2.6 seconds left was off target and stolen by the Mountaineers' Chris Wray.

The Privateers' tournament appearance was part of a huge turnaround for the school, which was severely damaged by Hurricane Katrina in 2005. They went 10-20 last season, but won the Southland's regular season and tournament titles for the first time in school history.

Their final comeback came up short.

After trailing by as many as 11 in the first half and nine in the second, they briefly took a 64-63 lead on Christavious Gill's free throws with 1:48 left. Robinson responded with his soft jumper, and the Mountaineers held on.

"We started the engine on the car, and now the car is moving," said Nate Frye, who led New Orleans with 18 points. "We've got to pick up speed and keep building off what we did this year. We established the building blocks of what was broken down from Katrina."

New Orleans forward Travin Thibodeaux and Gill had to be separated by a coach during a timeout with 6:36 left in the game.

Thibodeaux was called for a 3-second violation and complained to Gill as they headed to the bench. They exchanged words, and Gill pushed the forward away. Thibodeaux appeared to wrap his arm around the point guard's neck as they were separated.

Thibodeaux was benched the rest of the way. He finished with 11 points.

"Unfortunately, it will take away a little bit from the experience of the game and how great of an experience this was for us," coach Mark Slessinger said.

The Mountaineers wear warmup shirts with "Mayhem" on the back, reminding them of their pressure defense. They forced 14 turnovers that set up 19 points.

Next up for the Mountaineers? They'll try to pull off the biggest upset in tournament history, when they face reigning national champion and No. 1 overall seed Villanova.

No top seed has ever lost in the first round.