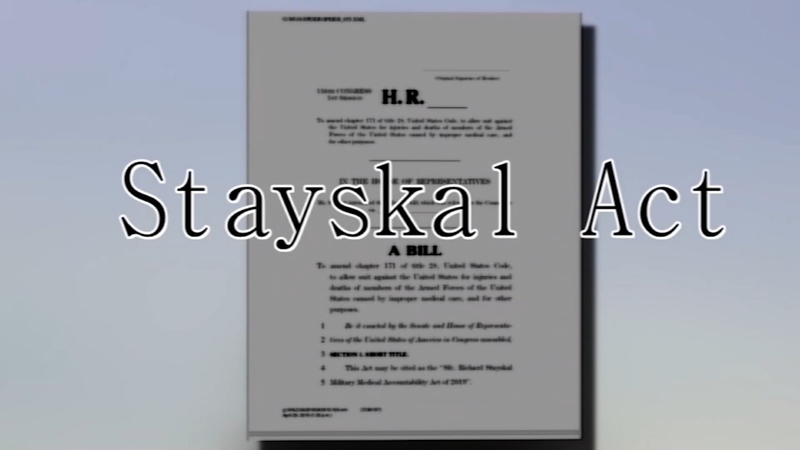 A victory in D.C. for Fort Bragg soldier

WASHINGTON (WTVD) -- Tuesday is a historic day in Washington D.C. It's a day that a Fort Bragg soldier fought for as he battled terminal cancer, a diagnosis he says military doctors missed.

Stayskal along with his wife, Megan witnessed the Senate approve the National Defense Authorization Act (NDAA). The NDAA is the defense spending bill that includes a provision Stayskal fought for which will, for the first time, give active duty service members the right to be compensated for malpractice in military facilities in cases that are unrelated to combat.

"I don't have enough words to describe right now, you know," Stayskal said. "It was a tough, hard challenging road for a long time it felt like but it was all worth it in the end. It's just a great day."

Big victory for Fort Bragg soldier Richard Stayskal & his team. The Senate passes #NDAA. The defense spending bill has a provision because of Stayskal’s fight that allows active duty military to be to compensated for military medical malpractice. #abc11 @WhistleblowerLF pic.twitter.com/nyTYsCO4Sk

After that physical, Stayskal's health declined, and it wasn't until he saw a civilian specialist off base where he was given the grim diagnosis. Stayskal is unable to sue for military medical malpractice because of the Feres Doctrine, which prevents active-duty military from suing. For the past year, Stayskal has been fighting to change that and give service members the same rights as civilians.

In between cancer treatments, We were with Stayskal as he took his fight to lawmakers in Washington. They listened and proposed The Sergeant First Class Richard Stayskal Military Medical Accountability Act of 2019. Provisions of that act are now included in the 2020 NDAA.

"We are all now united and we are able to give our military the rights that they deserve," said Stayskal's attorney, Natalie Khawam.

"This is everybody's fight, you know, for the last 70 years, everybody who's not had a voice or the ones who have tried and fell short, you know this is, this is, you know, victory for everybody, for service members across the board," Stayskal said. "You know, to have better accountability for medical system...and to keep soldiers healthy and keep them deployed and doing the job that they said they were willing to do. And, you know, it's just, it's a great day."

Wow! All of our priorities have made it into the final NDAA: Pay Raise for our Troops, Rebuilding our Military, Paid Parental Leave, Border Security, and Space Force! Congress – don’t delay this anymore! I will sign this historic defense legislation immediately!

The NDAA now goes to the desk of President Donald Trump for approval. The president has previously said on Twitter that he will approve it.

Stayskal said he hopes to be invited to the White House when Trump signs the bill.

"It was a long year and I wouldn't take it back for anything," Khawam said. "We achieved what we wanted to do. And here we are today to tell you the good news."