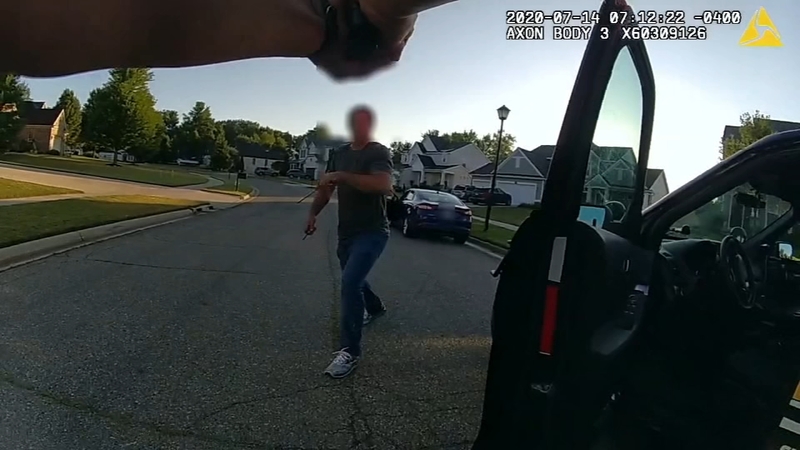 EATON COUNTY, Mich. -- A Michigan man was shot and killed by police Tuesday morning after he allegedly stabbed a person during a dispute over wearing a face mask inside a convenience store, authorities said.

Police said 43-year-old Sean Eric Ruis wasn't wearing a mask inside the Quality Dairy store when he got into a confrontation with a customer who was wearing one.

Ruis allegedly stabbed the 77-year-old victim and fled the scene in a vehicle. An Eaton County deputy pulled Ruis over near Lansing about a half an hour later, police said.

WXYZ reported a neighbor's doorbell camera showed another angle of the deadly confrontation as Ruis exited his car, moving slowly at first, then rushing the deputy.

In the video, the officer, who has not been named, is repeatedly heard asking the man to drop the knives before opening fire.

Ruis was shot several times by the officer as she backed away from the suspect. He later died in surgery.

The deputy involved was not injured and she has been placed on administrative leave while the police department conducts a review, Reich said in a statement. The Michigan State Police is also conducting an independent investigation into the deadly use of force and is leading the investigation into the stabbing incident.

"She saved her life. That's the most important thing right here," Reich said of the officer. "She had to use deadly force, and she did it properly and I'm glad she wasn't harmed in any way."

Reich said he did not know the current condition of the 77-year-old victim in the convenience store, but said he suffered a serious injury.

The sheriff said this is the first violent encounter regarding face masks in the county as he encouraged residents to wear them.

"The goal here is to be safe," Reich said at the media briefing. "That's all the governor is doing on this executive order -- to stop the spread of this COVID-19."

"Wear your mask. I wear my masks. My deputies wear masks. We all have to be safe," he added.