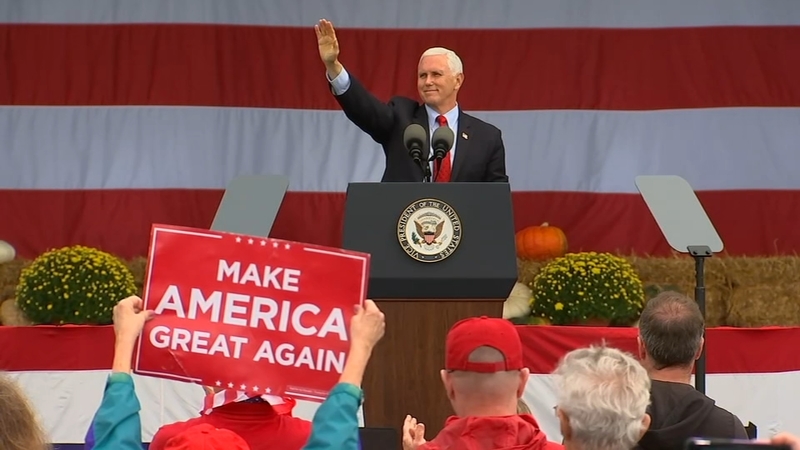 SELMA, N.C. (WTVD) -- Vice President Mike Pence traveled to Selma on Friday for a "Make America Great Again" event at The Farm at 95. Supporters were lined up well before the 2:30 p.m. event.

"I'm here for one reason and one reason only, and that is that North Carolina and America need four more years of President Donald Trump in the White House. It's on, North Carolina," Pence said at the rally.

Pence touted the "historic accomplishments of the Trump Administration" and the pro-growth policies enacted that led to record economic numbers before the COVID-19 pandemic and ensuing economic shutdowns.

"Under President Donald Trump, we're going to back the blue," Pence vowed. "We're not going to defund the police, not now, not ever. We are going to have law and order in every city in every state for every American of every race and creed and color so help us God."

Organizers expected a crowd of about 500 people, though rain may have lowered turnout slightly.

"More North Carolinians tested positive for coronavirus yesterday than ever before," Hunt said. "COVID-19 hospitalizations are on the rise, more than 3,800 are dead, and hundreds of thousands are struggling to pay their bills or keep their small business afloat. It didn't have to be this bad, but Vice President Pence - the head of the White House Coronavirus Task Force - has misled North Carolinians and grossly mismanaged the response since the very beginning of this pandemic. By turning their back on science and experts, Pence and President Trump turned their back on North Carolina - and shut the door on doing what is needed to end this public health crisis and the devastation it continues to cause."
"Vice President Pence might be able to delude himself into thinking everything is OK, but North Carolinians won't fall for his falsehoods," Hunt added. "We know we can do better - and a record number of North Carolinians have already cast their ballot for change, and millions more will join them during in-person early voting."

Hunt said the Democratic ticket of former Vice President Joe Biden and Kamala Harris will be "an experienced team in the White House who will listen to experts and work with North Carolina's leaders."

Harris held a virtual event in place of her planned visit to North Carolina on Thursday after two people involved in the Biden/Harris campaign tested positive for COVID-19.

North Carolina is seen as a battleground state and President Donald Trump has made more than a dozen visits, including a campaign stop in Greenville on Thursday. Pence made two appearances in the Triangle in September, visiting Christ Baptist Church and attending a "Cops for Trump" rally in Cary.