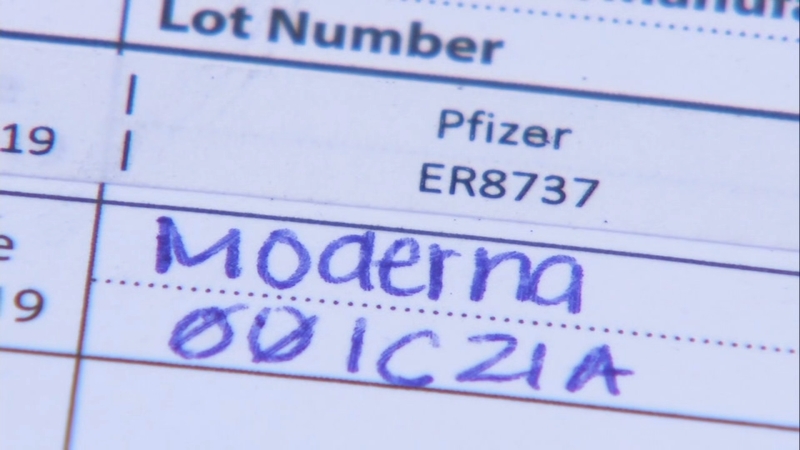 What happens if you get wrong 2nd vaccine shot? Doctor explains

MOUNTAIN VIEW, Calif. -- It was the second shot California resident Veena Thomas had been for waiting for. Instead of relief what she felt was panic after the needle was pulled out.

RELATED: Here's why some are experiencing side effects after 2nd Pfizer or Moderna vaccine shot

"She asked me 'did you tell them Pfizer?' and I said 'Well yeah! Sure. I told them Pfizer.' I got Pfizer for the first dose too and she said, 'Well your file is flagged as being Moderna, and I was like 'what!,'" described Thomas.

Veena says the nurse from El Camino Health in Mountain View, California noticed the CDC card said Pfizer seconds after injecting her with a Moderna dose.

"It seemed to be human error and that is why I'm concerned about El Camino's protocol to be honest," Thomas said.

"I told them basically three different times that it should be Pfizer for my shot. Obviously, it's in their medical records because I got my first dose there three weeks before. It was definitely in their computer system. Of course, I gave them my vaccination card again which very clearly says Pfizer and I also filled out the consent form. The consent asks you what did you get for your first dose and you check a box and I checked the Pfizer box," said Thomas.

Anecdotal evidence from women around the country has led to questions about how COVID vaccines may affect women's menstrual cycles. ABC7 spoke to a local OBGYN for answers.

Veena Thomas has a PHD in pharmaceutical sciences from the University of California San Francisco (UCSF), so she called the CDC after the incident.

"To see if they had any reports of anyone receiving two different doses or if they had individual statement in the matter," said Thomas.

On their website the CDC highlights that these vaccines are not interchangeable. Thomas said the CDC staff member on the phone told her there was no risk and that she is considered "fully vaccinated."
UCSF's infectious disease specialist, Dr. Monica Gandhi says vaccine mixing is already happening in the United Kingdom.

In the U.K. experts are trying to figure out if combining these vaccines will have an increased benefit.

"They are deliberately mixing vaccines to see if there is any benefit. They know there is no harm, but is there any benefit in increased immune response? There was a study in mice that showed that if you give different types of vaccines, which is called an Adenovirus DNA vaccine, like the J&J and an mRNA vaccine they got a better immune response," said Dr. Gandhi.

Dr. Gandhi says the Moderna and Pfizer vaccines are similar.

"They are both mRNA vaccines, and actually there is likely very little difference between them. What happened is that they took the entire sequence of what is called the spike protein and they took the genetic material for that. They used the same sequence and then they put a lipid bilayer around it and then they inject it in you. The different lipids around it may be different, but there is nothing that is different about them," explained Dr. Gandhi.

Even though Dr. Gandhi doesn't believe booster shots will be entirely necessary we asked.

When asked about whether Veena Thomas would be better off getting a booster shot, Dr. Gandhi said, "It likely will not make a difference."

In a statement El Camino Health said they are investigating the incident:

"Vaccine safety is of paramount concern to El Camino Health and we have administered more than 31,000 vaccines using careful vaccine administration and stringent safety protocols. These protocols include three separate confirmatory checks along the process, beginning at registration and ending in the vaccination area. We are currently investigating this incident and will reassess our safety protocols as needed. There is no known medical harm from receiving both the Moderna and Pfizer vaccines."

Veena Thomas hopes El Camino Health increases their protocols and that no one else gets injected with the wrong shot without their consent. As to her side effects: "I did get side effects, but I think they were the same as everybody else. Sore muscles, like if I've been working out or beat up, fatigue some nausea and I basically just slept it off for a few days," said Thomas.