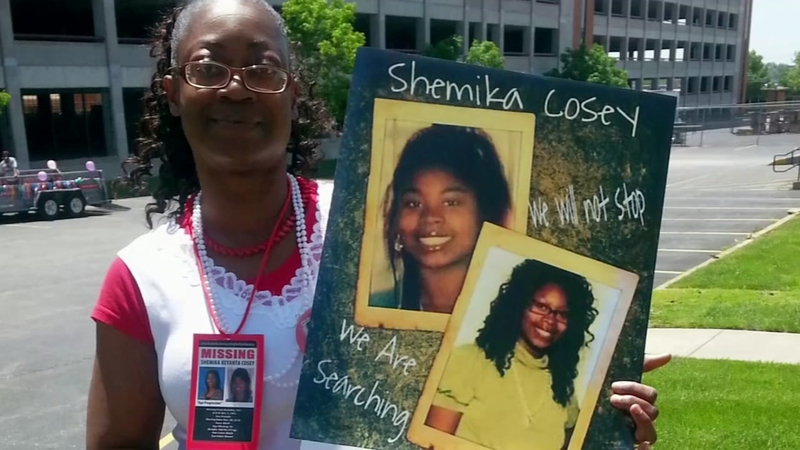 ST. LOUIS -- Shemika Cosey disappeared without a trace in 2008. But her family is continuing to fight to bring her home, despite what they say is a lack of action on the part of the police department.

She wants people to see her daughter the way she does to this day -- a little girl in pigtails.

"It's very hard, living day to day not knowing where your child is," she said.

The moment Cosey disappeared is burned into her mother's memory.

Cosey was spending the night with her cousins just a few days after Christmas. When everyone woke up in the morning, they discovered she was gone.

She was 16 years old, a door was unlocked and police in St. Louis believed she ran away, so they never searched for her.

"They're not doing anything because they think she gone on her own," said Hill. "I don't know what to do. Who do I turn to?"

"Cosey's story was different in that she just vanished without a trace," said Shawndrea Thomas, a local news anchor and reporter who produces a podcast documenting forgotten cases of missing black Americans. This story was one of her first.

"She was going in and out of the house that particular night," Thomas said. "Around 1 a.m., she left outside, she left the house, she left with her purse and her jacket. Her belongings, her overnight bag were still left on the counter in the house and she was never seen again."

Her mother said her daughter wasn't perfect. She once discovered a fake ID. Another time, she saw her daughter in the dark sedan of an older man.

Hill said she thinks her daughter might have been caught up in the sex trafficking trade.

Frustrated with police, the family went searching on their own. They posted fliers outside nightclubs where the teenager used to sneak in.

Years later, when Hill and her two other girls were packing up to move, they found a major clue: one of her notebooks.

A few months before she disappeared, she talked about a boyfriend and sharing with him that she might be pregnant.

"I can't allow him to feel like he got power over me," one of the entries said.

Police interviewed the boyfriend but found no leads.

"I can ensure that this department has tried to do everything in our power to find Shemika Cosey," Major Art Jackson with the Berkeley Police Department said.

They said the case is still active and, recently, calls have started coming in.