'Save the post office from Trump': Durham rally joins in on nationwide protest 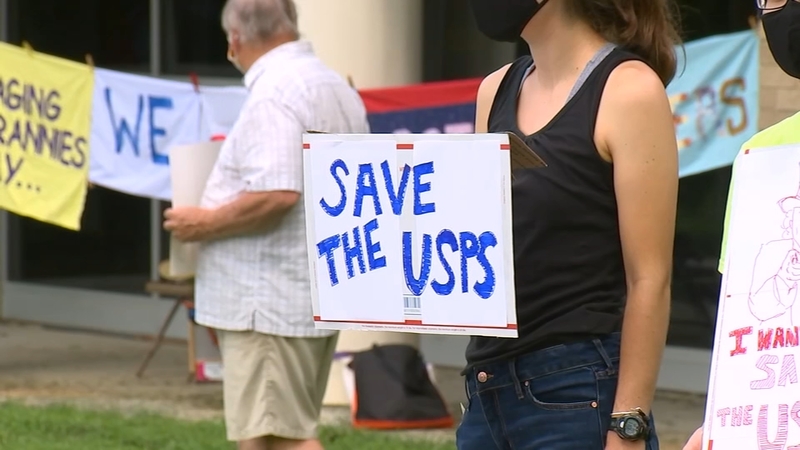 Protesters rally in Durham to 'Save the post office from Trump'

DURHAM, N.C. (WTVD) -- Dozens of people, including members of MoveOn, the NAACP, Raging Grannies, Vets for the People and other advocated of progressive causes gathered outside the Kangaroo Drive post office in Durham Saturday morning. Organizers describe it as part of a nationwide day of action they call "Save the Post Office From Trump."

Those holding signs with messages of support for postal workers share the concerns of post office customer Veronica Roberts, "If you put your ballot in the mail, whether it's gonna make it, or not."

They're following the news reports of action taken by Postmaster General Louis DeJoy, a donor to President Donald Trump's campaign. As ABC News reports, Democrats in Congress accuse DeJoy "of engineering changes at the agency in an effort to sow distrust in mail-in voting and impact the results of the election as Americans are expected to vote by mail in unprecedented numbers amid the coronavirus pandemic."

"(DeJoy) has the ability to undo it if we just demand it, and we don't settle for less. He can fix this," Barbara Zimmerman, one of the people at the Durham post office demonstrating for the workers said.

While postal employees did their jobs without commenting to the media, retired postal workers James and Charlene Young shared what they've heard from those who remain on duty.

"They don't like it, because they can see all the mail piled up," said James Young. "All the parcels and the letters, and you don't know if you're gonna get first-class mail on a regular basis anymore."

The Youngs, who drove from Winston-Salem for Saturday's Durham demonstration, credit their postal jobs with their ability to travel after retirement.

"My family's long time postal workers as well. It's a good way to make a good living, and we support 'em," Charlene Young said.

James Young's taking no chances with his ballot this fall as he and others, like Veronica Roberts, plan to vote in person.

"I'm gonna go to the polls, but some people may not be able to make it to the polls," Roberts said. "So I guess that's why a lot of people are out here standing now."