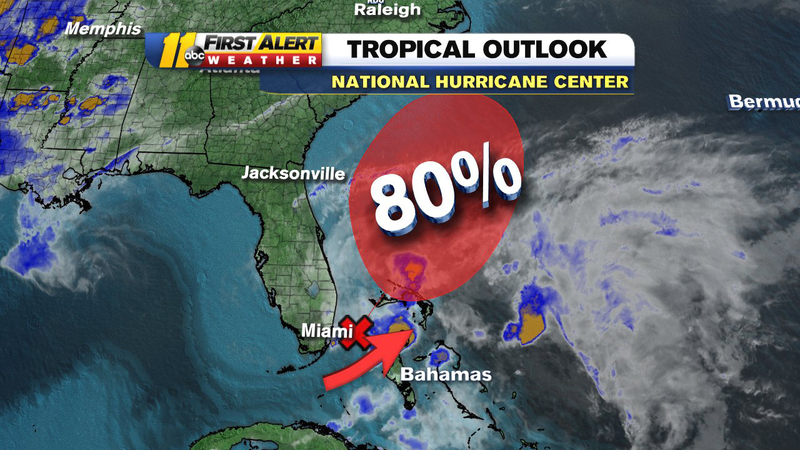 RALEIGH (WTVD) -- We're still watching an area of disturbed weather--that's just an area of showers and storms--over the Florida Straits and Bahamas.

It appears that conditions are favorable enough for this to develop into a tropical or subtropical depression or storm as we head into the weekend. The big question is: does it have any impact on North Carolina?

Right now, the answer looks to be: not much.

If this develops into the first named storm of the year, it would be the 6th year in a row that there would be a named storm in the Atlantic before the season officially begins.

Friday, the National Hurricane Center increased the chance of the system turning into Tropical Storm Arthur. NHC said there is now an 80 percent chance that happens in the next 48 hours.

The Saturday morning update said the area of low pressure is better defined, but the associated showers and thunderstorms remain disorganized.

The low pressure system, in whatever form it takes, is forecast to track to the northeast and stay a few hundred miles off our coast by early next week. On this track, there could be a few showers on the Outer Banks by early in the week.

It's unlikely that it will get as strong as a hurricane-winds of 74 mph or higher-because the waters off our coast are still too cool. Most water temperatures right now are in the low and mid 70s, and you need water temperatures of at least 80 degrees for a tropical system to really thrive.

The biggest threat to our coast on the forecast path would be rough surf and dangerous rip currents. And we all know that rip currents can be deadly if you don't know what to do if you get caught in one.

Lots of quarantine weary folks could be headed to our beaches this weekend, so be extra careful if you're one of them.