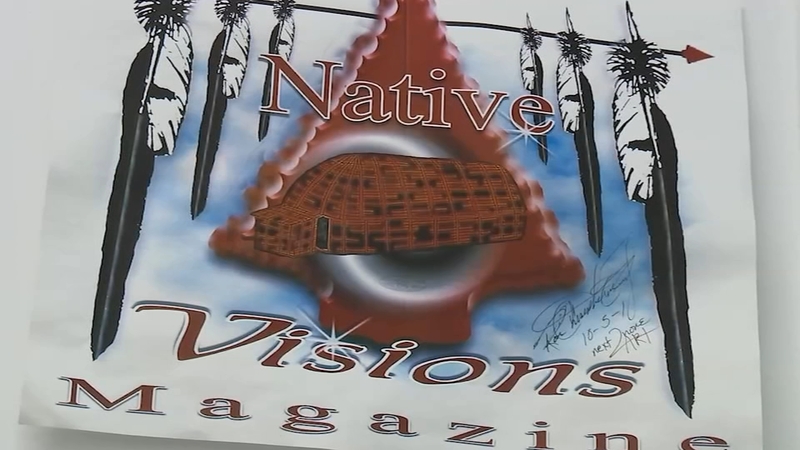 James Locklear moves a little slower these days. He is recovering from a stroke, but he has the unwavering strength and dedication to guide one cause. Locklear runs "Native Visions Magazine." He pours himself into the pages of the publication.

"There was so much negative news coming out of the native community, you never saw any positive stories," Locklear said. "There were so many folks doing great things, but it was just overshadowed."

He was once a full-time news reporter based out of Fayetteville. He left the position after more than 15 years and took the skills he learned and parlayed it into a project to honor underserved people.

He has traveled the country documenting the accomplishments of pioneers and worked to empower others to push forward. He sees himself as both a journalist and a historian.

"Every time we lose an elder and I don't get to record the story, it's tough because I don't know what I lost there," Locklear said.

The walls and door to his office are adorned with stories of barriers broken. Locklear did a profile on the first Lumbee to participate in Division I athletics back in the late 1930's.

"Amazing being that at that time in North Carolina, Native Americans were not even allowed in state-funded schools," Locklear said.

Locklear has met with war veterans, who made sacrifices abroad to defend their native land, and has also written about professional athletes who left Lumbee nation for the major leagues.

"Native Visions" is basically a one-man show. In addition to being the publisher, Locklear is also the photographer, graphic designer, delivery service, and even the janitor.

The work can be very consuming, some weeks he works as much as 80 hours.

There is an appetite for what Locklear is doing. Tens of thousands of Native Americans subscribe to the monthly publication. Circulation in Cumberland County is second to the paper where he once worked. But readership reaches far beyond the confines of his local community.

"I am (read) all the way from the North Pole, Alaska, to the Panama Canal," Locklear said.

Locklear offers the magazine free of charge to those who want to stay connected. The paper survives on advertisements and the determination of one man who puts aside limitations for the greater good.

I just hope and pray to God that I can continue to do what I do," Locklear said. "It's actually allowed me to give back to the community and that's something I've been taught all my life: the aspect of charity and giving back."
Report a correction or typo
Related topics:
societylumbertonnative americannative american heritage month
Copyright © 2022 WTVD-TV. All Rights Reserved.
TOP STORIES
Cooper 'more concerned' about this winter storm than the last one
Winter storm likely to hit east of I-95 hardest
Schools in Wake, Durham counties to close Friday
American Airlines flight diverted over maskless passenger
Only one monoclonal antibody treatment is effective, NIH says
Florida doubles down on anti-critical race theory legislation
LATEST: Governor says focus on vaccines, testing -- not mandates
Show More
Jury selection begins in federal trial over George Floyd's death
'We can't get any more': Stores struggle to restock shelves
Essentials to keep in your car during winter storms
FBI issues new warning on QR codes
M&Ms' beloved characters are getting a new look
More TOP STORIES News