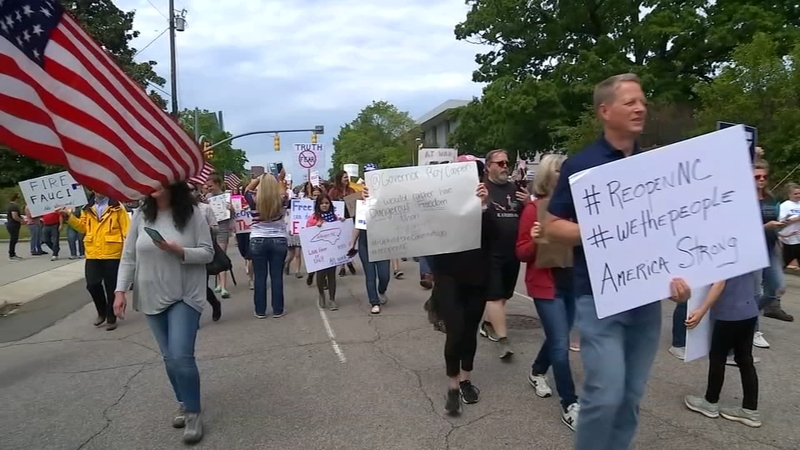 RALEIGH, N.C. (WTVD) -- Protesters who want North Carolina to reopen for business held their second protest outside the state General Assembly on Tuesday.

After protesters voiced concern that they would be arrested for exercising their right to protest, Gov. Roy Cooper informed them that they had every right to protest. However, he said they needed to practice social distancing, in accordance with his Executive Order, while holding their protest.

Hundreds of protesters gathered outside the General Assembly around 11 a.m. Tuesday morning. According to Chopper 11's crowd estimator, the group was made up of approximately 300 people.

Another day, another protest. Demonstrations to #ReopenNC now underway in front of @NCLeg. This has the makings of a tailgate, a campaign rally, a protest, a social distancing gathering, and an airing of grievances all at once. @ABC11_WTVD @ABC @ABCPolitics #coronavirusNC pic.twitter.com/Gl42COMOca

Denise Gleason came to the rally from New Bern, where she owns and operates a bed and breakfast.

Her coastal town is still reeling and rebuilding after hurricanes Florence and Dorian.

"If this goes on much longer, and that's why we're here," Gleason said. "We're scared."

Law enforcement kept their distance Tuesday even though most of the protesters weren't. The crowd marched peacefully around state government buildings and the governor's mansion.

"Just two short weeks ago the ReOpenNC Facebook page had about 100 friends and followers," said Ashley Smith, co-founder of the movement. "Two days ago, we hit over 60,000 friends and followers. If that isn't a clear message to Gov. Cooper and our elected officials on both sides of the aisle, I'm not sure what is."

The protest began minutes after North Carolina announced that 34 more people had died from COVID-19--the largest single-day increase to date.

In just 27 days, the virus has been blamed for a total of 213 deaths. With limited testing, the state has confirmed at least 6,951 people have tested positive for the virus.

Cooper and the state's health experts, as well as federal health experts in President Donald Trump's administration, all have said that social distancing efforts--including business restrictions--have helped stem the tide of infections and deaths related to COVID-19.

"We are working to ease restrictions in a responsible way, in a staged way," Cooper said Tuesday. "We understand that we can't stay at home forever and this is not something that is sustainable long term. But what we have to do is ease back into it to make sure that this virus does not spike, which it very easily could do."

The protesters in Raleigh say it is time to roll back those restrictions and reopen North Carolina for business.

"When I started this, I simply expressed my family's wishes and the wishes of friends and other working class families like us; how do we reopen the state for business, safely and efficiently, minimizing risk and, preventing thousands of businesses and 600,000 workers from going under?" Smith said.

The protesters broke into chants of "USA," "Freedom or death," as well as "Roy Cooper has got to go." They say they are unhappy with the governor's handling of the coronavirus pandemic.

"As far as the right to assemble peacefully, to say this 'doesn't matter' is simply a travesty," Smith said. "Some in law enforcement and some elected officials have made this absurd statement. Rights matter under any circumstance."

According to the conservative-leaning Civitas Institute, Cooper has an 84 percent approval rating for his handling of #coronavirusNC with only 11 percent disapproval.

As #ReopenNC raises its profile, some important perspective courtesy of the conservative @NCCivitas: @NC_Governor has an *84%* approval rating for his handling of #coronavirusNC with only 11% disapproval. @ABC11_WTVD @ABCPolitics @ABC #abc11 pic.twitter.com/v4EpuxpUa0

"If today's turnout of hundreds of people is any indication of our success in delivering this message," Smith said, "our Governor and elected officials need to start paying attention. We're not going away."

Mark and Brenda Fann made the trip from the Outer Banks, where they run a fishing charter company.

"My scenario is like a zip tie around my neck and every day it goes click, like the handcuffs," Mark Fann said. "The next it goes click, well I'm still breathing, the next day it goes click. How many clicks do we have left before we can't breathe?"
Report a correction or typo
Related topics:
politicsncdowntown raleighraleighprotestbusinesscoronavirusnorth carolina news
Copyright © 2022 WTVD-TV. All Rights Reserved.
CORONAVIRUS
A new billionaire has been minted nearly every day during the pandemic
Parents share mixed reactions over plans for boosters for children
CDC director signs off on booster shots for children ages 5 to 11
2 years into COVID-19, some remain in complete isolation
TOP STORIES
Clayton police searching for man involved in shooting injuring 1
Event for Ukraine raises money for paramedics on frontlines
Zibanejad leads Rangers to 3-1 win over Hurricanes in Game 3
1 person in hospital after a pedestrian was hit crossing I-95
78,000 pounds of infant formula arrives in US
Barber attempts to cut concerns about violence in Durham
12-year-old girl escapes burning Cary home
Show More
Texas woman sought in fatal shooting of pro cyclist: US Marshals
Snorkeler finds $2,000 dentures in Gulf - reunites with owner
'Absolutely terrified' teen boy dies hours after 'sextortion' scam
AAPI heritage celebration highlights cultures and traditions
Barbershop Buzz helps concerned men share fatherhood advice and tips
More TOP STORIES News