Gov. Roy Cooper explains why North Carolina is not ready to reopen completely 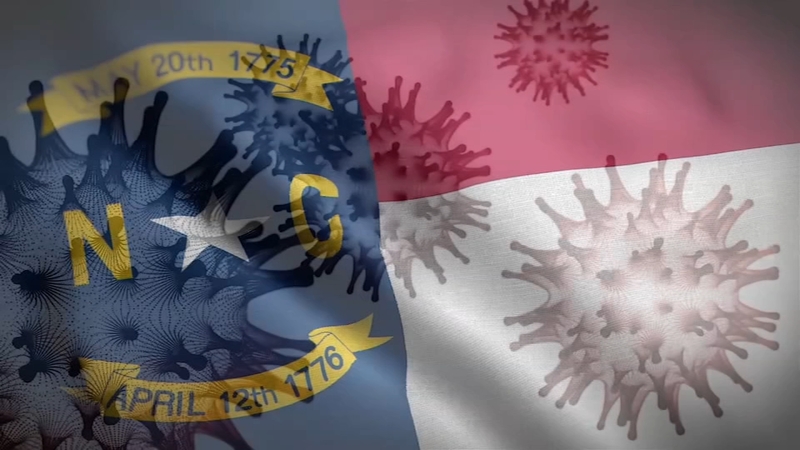 RALEIGH, N.C. (WTVD) -- North Carolina Gov. Roy Cooper sat down for a one-on-one with ABC11's Jonah Kaplan to provide an update on the state's response to the COVID-19 pandemic and explain why Phase 2 of reopening is more modest than initially planned.

Jonah Kaplan: We've listen to you intently over the last several weeks and months and we've followed the metrics. Testing is way up, more than half of all cases are recovering, we've never gotten close to overwhelming hospitals, capacity is absolutely there. Forget about flattening the curve, I think someone said we've crushed. I'm not sure we ever had one. So with all of that in mind, with all of that good news, why are we tip toeing into Phase 2? What is the bad news we're missing here?

Governor Roy Cooper: Well we've done well and a lot of people would argue that we need to open way up, but let me just say this. Our numbers are positive because the people of North Carolina have done what we have asked and we have made this decision because of that success. We do want to move into Phase 2. We do want boost our economy, but at the same time, today we've got the highest number of COVID positive cases that we've had so far and over the last week we've seen a continuing increase in numbers of positive cases. Now part of that is because we're doing more testing, but it does cause significant concern that we are seeing the increase in positive cases. That's why we want to be cautious about going into Phase 2 and why we structured that the way we did.

But are you concerned that we're moving the goal posts here? Because at first the goal was flatten the curve, now it seems like we keep shifting those goals.

No, in fact we are moving into Phase 2 two weeks after going into Phase 1, which is what we planned to do. We did shift a bit some of the businesses we were going to allow to be open. At the same time you see hospitalizations creeping up just a little bit over the last few days, so it's important for us to look at trends and indicators over time. There are still people dying every day in North Carolina; over 700 people have died. We know that this is a serious virus and we have to be concerned that people might drop their guard and we do not want them to do this. It was a big deal to lift the Stay at Home order, which we have done, but we've also told people, in particular in the vulnerable category, that it's still safer for them at home. It's going to be important for people to pull together, do the Three W's - wash your hands, wait six feet apart from each other, wear a face cloth covering - because this could get away from us quickly and we do not want that to happen.

What are the chances of, let's call it a Phase 2.5 - entertainment venues, playgrounds, gyms, bars. Forgive the expression, but it was a buzzkill for a lot of North Carolinians when those didn't make the cut. Do we really have to wait five weeks for these to open, especially considering the new CDC study that just said the virus is less likely to be transferred on surfaces?

What we do know is the virus is more likely to be transmitted when people are gathered together in situations where they are not socially distant and particularly when they are inside. Most of the businesses that have been kept closed under this Executive Order present this kind of high risk category and it's important we not move too fast. We would like to see Phase 2 go the five weeks. I do think it's important that we remain flexible. It's a potential that if cases begin to spike, and hospitalizations continue to rise, that potentially we'd have to go backward. But what we want to do is continue moving forward, and we think we can do that and boost the economy when we make sure people know that they're safe when they go out. People having that confidence is going to be so important. Even if the state dropped every restriction in place, you still have a lot people that are going to be concerned for their safety. And I tell business people that we are going to have to work together. These restaurants have worked very hard to provide a safe environment, to make sure their employees are trained. We believe this will be a safe place for people to go. We're going to continue to move with caution and not haste because we're talking about a life and death situation here with people.

Our last question for you is about unemployment. I know it's something you've committed to improving, the unemployment office. We know you've been pushing staff to do better, you've been adding staff and adding capacity, and we know it's an unprecedented time for that office. Still, it's the number one complaint among callers to our station. Every day we hear from struggling people. What specifically is your administration to alleviate those concerns, to increase capacity even more and to make sure that the added stress is not going to be there?

Yes, 565,000 people are receiving unemployment payments of over $2.3B so far, but I am well aware there are thousands of people who have not received their benefits and people that are filing every single day. It's unacceptable when someone can't get a person on the phone. We are pushing the division as hard as we can to hire more people, to get them trained, to increase their chat operation, to get more people processing claims. That's going to be done. They're continuing to improve the operation to add people and it's critical for people who are struggling and who need help. One of the things I did with an executive order was make it a lot easier to get unemployment benefits, if you can believe that. Under this law, there was a requirement that people have a one on one interview. I waived that requirement. It's also a requirement under the3 law that people thave to go looking for a job and bring back five applications they've filled out every week. We've waived that requirement. It's also a requirement under the law that the employer be responsible for part of this payment and we've waived that requirement. So what we've done is made it easier under the law, under a very restrictive unemployment law, one of the worst in the country. We've made it better but we know what we got to do is to make sure this process is running smoothly, the customer service is better, and I'm committed to making that happen.

Governor Roy Cooper, the Chief Executive of North Carolina. We hope to see you in person soon.