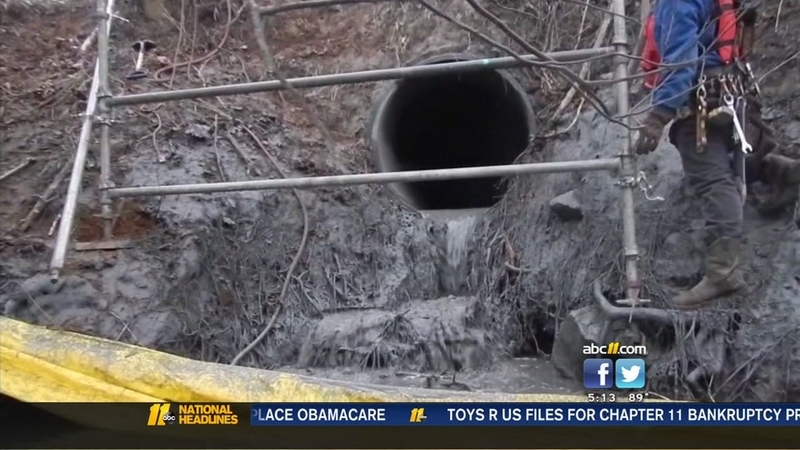 NORTH CAROLINA (WTVD) -- If you live close to a Duke Energy coal ash pit, what should you do in case of emergency? If a dam wall bursts, who should you call? Could your home or business be impacted?

You should be able to find answers to these questions in publicly available documents published by Duke Energy and available on the energy giant's website. At least, that's according to the federal EPA.

In many cases, however, the specific answers have been blacked out by Duke officials, and an environmental group in Chapel Hill filed notice Wednesday to hold the company accountable.

The Southern Environmental Law Center (SELC), along with other national environmental groups, sent Duke Energy and government officials both in North Carolina and in other states where Duke Energy has coal ash lagoons, notices that they intend to sue the company for withholding that critical dam safety information.

Earthjustice sent similar notices on behalf of community organizations in Kentucky and Indiana.

Under the Coal Combustion Residuals Rule enacted in 2015, Duke Energy was required to make public Emergency Action Plans for each of its coal ash storage sites where a failure would likely result in loss of human life or serious harm to the environment by April 2017.

That very thing happened on February 2, 2014, along the Dan River, sending a wake-up call to residents and lawmakers alike.

Those plans are required to include inundation maps to show the surrounding areas that would be damaged by a failure of Duke Energy's dangerous coal ash storage sites and also the names and contact information for emergency responders.

The idea is to let communities know the risks they face and how to respond when a coal ash disaster occurs.

Unlike other utilities, Duke Energy has redacted huge chunks of information from its plans. Maps, emergency contact information, and other important safety information are hidden behind black boxes.

According to SELC senior attorney Frank Holleman, Duke Energy is the only utility company in the country that is withholding this information from the public.

In all of Duke Energy's Emergency Action Plans, including states that face flooding and hurricanes, Duke Energy has blacked out the coal ash spill maps and information for how to contact emergency responders in the event of a disaster.

An example of Duke Energy's blacked-out emergency plans can be seen here.

ABC11 reached out to Duke Energy for comment and they said they have yet to receive the notices; however, they did make the following comments:

"Duke Energy has been caught red-handed with coal ash on its face acting illegally by withholding important safety information from the public," Holleman said. "After we made it public that Duke Energy's illegally withholding public safety information, Duke Energy now says it will reconsider whether it will make public this important information about the risk from its irresponsible storage of coal ash. North Carolina communities cannot risk waiting until Duke Energy moves all of its coal ash from its primitive, unlined pits and away from our rivers and lakes to safe storage.