North Carolina gas prices rise 37 cents in a week on average, price per gallon sits around $4 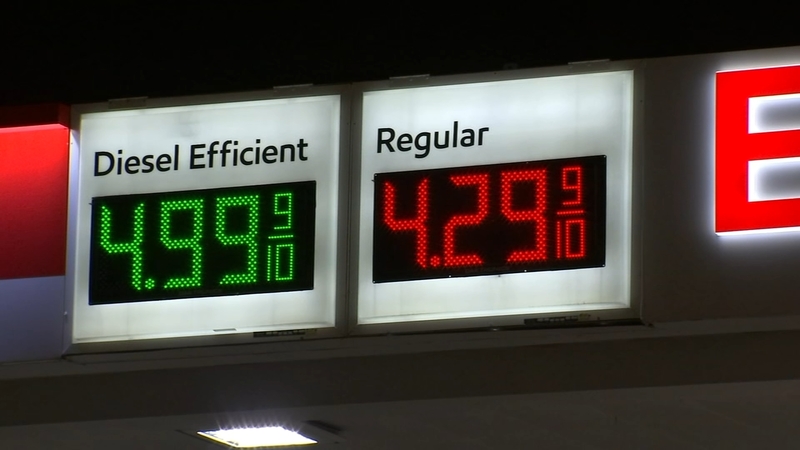 RALEIGH, N.C. (WTVD) -- In just a week, gas prices across the state of North Carolina have gone up about 37 cents on average, according to the American Automobile Association (AAA).

Currently, according to AAA, the average price of gas across North Carolina is $3.92. That's a 71 cent climb from a month ago and $1.35 more than a year ago. However, as of Tuesday morning, GasBuddy.com, which tracks prices in real time, said prices through most of central North Carolina ranged from $3.92 to $4.12 per gallon on average.

A spokesperson for AAA blamed the rising prices on the ongoing Russian attack on Ukraine.

"Unfortunately this isn't the end of seeing prices rise at the pump," said Tiffany Wright, spokesperson, AAA - The Auto Club Group in the Carolinas, said in a written statement. "Motorists could continue to see record-high prices at the pump because of the high oil prices that are surging due to the Russia-Ukraine conflict. Sanctions and regulations against Russia have limited its ability to sell its oil on the global market, which has intensified global supply concerns in what was already a tight market due to the pandemic."

U.S. Sen. Thom Tillis, R-NC, said Monday that he and other Republican senators recently sent a letter to President Joe Biden calling on him to "reclaim American energy independence" by approving the Keystone XL Pipeline and opening federal lands to energy producers to increase domestic energy production in the face the Russian aggression in Ukraine.

"The world is in peril and we would like to work in a bipartisan manner to meet the challenges of our time," wrote the senators. "In the area of energy independence, we have lost ground. Opening up American oil and gas deposits, and in particular approving the Keystone XL Pipeline, would benefit our allies suffering under Russian tyranny and American consumers facing steadily increasing prices at the pump."

The senators noted that while domestic oil production doubled in the last decade, Biden's first year in office was marked by steps that have "backpedaled America's energy independence."

Some of the actions include Biden's executive orders revoking a previously approved permit for the Keystone XL Pipeline and pausing new oil and natural gas leases on public lands and offshore water. Increasingly, the country has again become more dependent on foreign oil.

"Through smart energy production, we can fulfill our energy needs while simultaneously exporting oil and gas to our allies," the senators continued. "Low carbon technologies are worth investing in; however, the reality of the moment is that America is increasingly reliant on imports of foreign oil. The spike in oil price is a result of Russia's incursion into Ukraine, which benefits the Putin regime and hurts American consumers."

Whatever happens in Washington, Connel Fullenkamp, Duke University Professor of Economics said consumers should think twice about their trips in the months to come.

"I think this is really hard in a car-based society," Fullenkamp said. "People need to think very carefully about their transportation needs. What they really need to do, where they need to go, how they need to get there."

Fullenkamp said it will be a while before people get to the point where this is a seismic shift strong enough to disrupt the pain at the pump.

"'It takes quite a while for people to really adjust their lifestyles," Fullenkamp said. "They will eventually, especially as gas prices continue to rise really rapidly."

Even worse, summer blends are expected to raise gas prices even more, as they historically do.

Haley Rogers, of Raleigh, was filling up her husband's car on Monday.

"Hopefully we stay under $6 (per gallon) I hope ... this already feels pretty high," Rogers said. "I'm just assuming the worst, I suppose."

Rogers said it makes one think twice, as Fullenkamp suggested.

"It definitely puts more thought into it," Rogers said. "To make the trip purposeful and not just hop in the car for a quick Target trip. So kind of wait until you need all the things."

She said there wont be any recreational road trips soon because of the high gas prices.

Daniel Luck of Raleigh said if gas keeps creeping up it might make him alter his strategy.

"If I'm meeting up with somebody, nothing can stop me," said Luck, who was on his way to meet friends. "But $5, I definitely might just Uber.

AAA added that the price of oil increased $24 per barrel, which could result in another 10 to 15 cent increase at the pump.