﻿'I am cutting corners': North Carolina drivers want a gas tax cut but it comes with risks 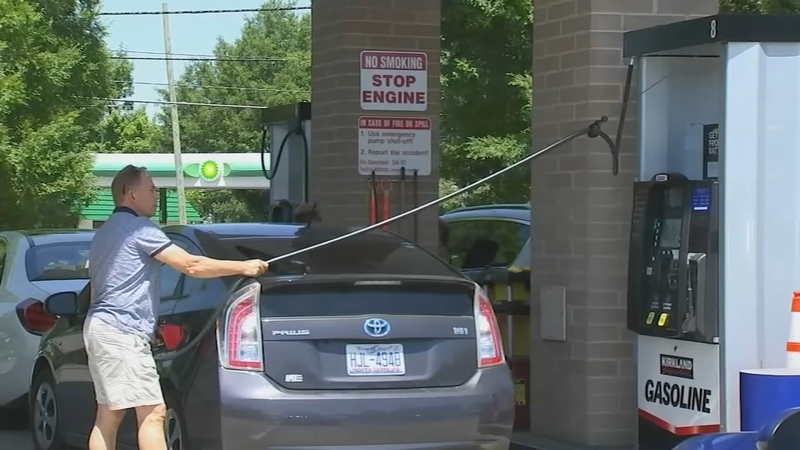 Drivers hope for relief at the gas pump

RALEIGH, N.C. (WTVD) -- In the race for relief at the gas pump, President Joe Biden has called for a three-month federal gas tax holiday. There's no guarantee that a gas tax holiday savings will actually trickle down to consumers.

Some lawmakers and economists said they believe a gas tax holiday does not address the real problem: High demand and low supply.

But all the drivers that ABC11 spoke to on Wednesday want relief at the pump right now.

"You know any time you can save money in your pockets, it's good," said Steven Chestnut.

"I am cutting corners. I don't eat as much these days," he said.

Andrea Godwin lives in Granville County and commutes to Durham for work.

This year, AAA predicts there will be 42 million people traveling.

"In Virginia last week, I spent over $5 a gallon. It was $168 to fill up the truck. I don't want to do that again," said Glenn Bowman as he pumped gas Wednesday morning.

Bowman, just like many others, is not happy seeing that dollar amount climb.

Biden is calling for a change to help with that.

In North Carolina, the gas tax is 38.5 cents a gallon.

Pros and Cons of a gas tax

A local economist told ABC11 that there are positive short-term impacts.

"It would be a 3% decline in the price of the pump. I think most drivers would view this positively. But I think they would also say, well, it's not enough, we need gas to go down by over $1 a gallon, not 18.3 cents," said Michael Walden an economist at NC State University.

He said there may also be potentially negative long-term effects.

"It's relatively minor based on what we pay. And it does incur these losses to an important function of the federal government, which is providing monies for transportation projects to states and localities," said Walden.

This suspension will cost about $10 billion.

Biden also called on state leaders to suspend their gas taxes, as Georgia has done.

So a combined suspension could save you at least one dollar depending on the state.

"In North Carolina, for example, those are big, we primarily have a statewide transportation network with virtually all funding done at the state level, whereas some states haven't done at the county level. So it would have a big impact here in terms of reducing our revenues," added Walden.

NCDOT estimates the gas tax produces about 50 percent of all state transportation revenue.

"I think it would be great but it makes me worry about the taxes those things could be paying for. What's going to happen with that?" said Godwin.

DOT says even a short tax suspension would push back construction and maintenance projects. The agency delayed projects during the height of the COVID-19 pandemic when officials say highway traffic volume dropped up to 50%.

"How can we get gas prices down? The most logical place, the quickest place to do that is to get foreign producers to produce more," he said.

AAA Carolinas warned there's no guarantee a $.56 cent savings from a federal/state gas tax holiday will trickle down to us. It would be up to each gas station. Some may opt to use the discount to cover their own costs.

And that's a concern that Gov. Roy Cooper has about a possible tax cut. He supports the President's effort.

Cooper's office sent ABC11 a statement that says in part: "The gas tax pays for critical infrastructure funding and legislative leaders have said they're not open to a change at this time."