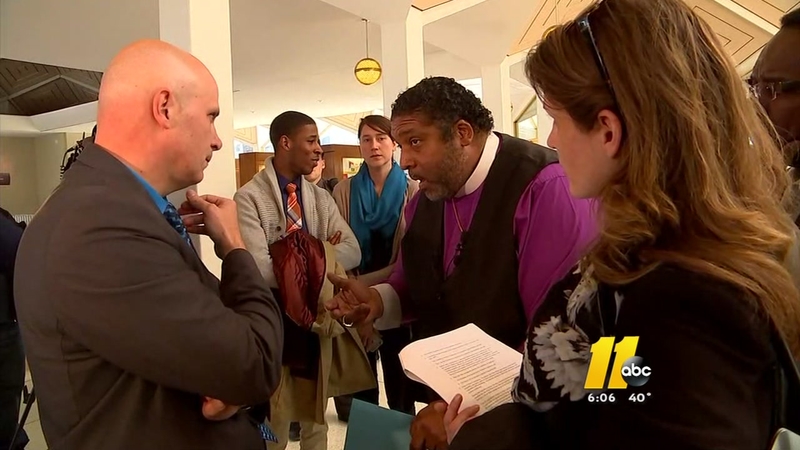 RALEIGH, North Carolina (WTVD) -- The president of the North Carolina NAACP was threatened with arrest Wednesday at the General Assembly just moments before he was scheduled to hold a news conference.

Because of the bitter cold, the NAACP tried to move the news conference inside to the rotunda in the third-floor viewing area.

The chief of the General Assembly's police force followed NC NAACP President the Rev. William Barber to the third floor and warned him the entire way that he would be arrested if he tried to hold a news conference without a permit.

In the end - after getting legal advice from his staff - Barber decided to hold the conference outside, in front of the building where the group had originally been given a permit.

Barber announced that next week hundreds of people from all walks of life would be at the legislature for the annual "Forward Together Moral Advocacy and People's Legislative Day."

He also derided GOP legislative leaders - repeatedly calling them the all-white Republican caucus - and saying they are quickly moving the state backward.

The General Assembly police chief told ABC11 that it is OK for one media organization to interview individuals in the third-floor rotunda.

But, the chief said it is against the rules to hold a news conference being covered by multiple media outlets in the rotunda.

Barber held the news conference in part to protest legislative bills such as House Bills 239, 240, and 241, which, among other things, strip the governor of the power to appoint members to the Court of Appeals and Superior Court.

Hooks and Trogdon had been subpoenaed to appear before separate Senate policy committees. Questioning was generally friendly and their qualifications were praised.

Cooper doesn't believe a December law subjecting his Cabinet to confirmation is constitutional and has sued to overturn it. Republicans disagree and point to the state Constitution for those Senate powers. A three-judge panel heard those arguments last week but hasn't ruled.