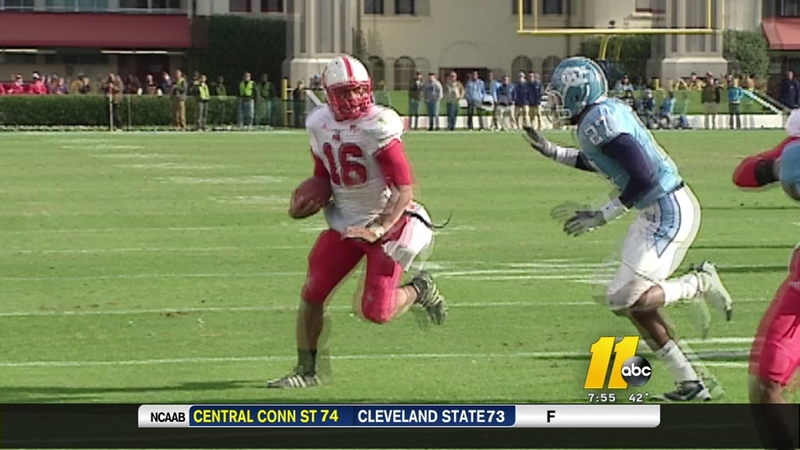 RALEIGH, North Carolina (WTVD) -- Saturday will be my 13th NC State vs UNC football game at ABC11. That hardly makes me an elder media statesman around here, but I've been on this Triangle sports beat long enough to see some things between these two teams.

Here then, are the top 5 rivalry moments of my tenure.

*(As fate would have it, I started here just about a week and a half after the "TA McClendon-stuffed-at-the-goal-line/was-in" game. Therefore, that just missed the cutoff.)

5. I'm going to cheat right out of the gate here and pair two separate games up. Twin wins by the Wolfpack that seemed to be potentially rivalry-defining at the time.

2008 - Chapel Hill. Freshman Russell Wilson and State rolled into Kenan Stadium as a decided 11-point underdog to Butch Davis' glitzy No. 22-ranked Tar Heels. What followed was a 41-10 decimation. Wilson was impeccable. Heels fans were running for the exits, the "Wolf-Pack" chant was ringing through the empty stands and afterward, Tom O'Brien had some fighting words:

"What it speaks to, is we're the best football program in the state ... without question."

Tom O'Brien proclaims the Wolfpack the best team in the state.

While TOB had great success vs. Carolina, the Wolfpack era of dominance never materialized.

Like a football sommelier, that State entree pairs nicely with a 2014 Wolfpack Chianti. It was second-year man Dave Doeren who marched into Kenan this time.

Once again, the Pack were touchdown underdogs. Once again, they dominated, physically overwhelming Larry Fedora's club. It was 35-7 at the final bell, but Carolina had been KO'd much earlier on. Like TOB before him, Doeren sought to usher in a new era of rivalry ownership afterward with his words:

"This is a blue-collar school ... a work ethic, hands in the dirt school. It was founded by tough people. That is what this football team will be."

4. 2015 - Raleigh. Perhaps the apex of Carolina's offensive rebirth under Larry Fedora. What was supposed to be a close contest was tilted on its head in the first quarter. The Heels ripped the Pack defense to shreds. 35 points in all in the first 15 minutes, including touchdowns of 42, 53 and 40 yards.

This offensive explosion sealed this win for the Tar Heels at Carter-Finley Stadium in 2015.

Former State QB Terry Harvey was close to me on the sidelines that day. After the first score he was unconcerned. After the second, he looked at me and said confidently, "this'll settle down." After the third, fourth and fifth scores, he could only shake his head and laugh.

3. 2010 - Chapel Hill. The 2-yard Hail Mary. Russell Wilson had already made the extent of his powers clear at this point of his career, but to UNC's defensive credit, they'd held him under wraps for most of the game.

That was, until late in the third quarter. Chased out of the pocket, Russell retreated and retreated, finally slinging a prayer into the back corner of the Kenan end zone in front of the UNC students. Owen Spencer fluttered in on angel wings and somehow scooped the deflected ball before it hit the turf:

A melee ensued. UNC LB Kevin Reddick and State WR Jarvis Williams were both ejected. It was the culmination of the Russell Wilson-can-do-anything experience (TJ Graham streaking 87 yards not two minutes later helped a bit too.).

It was a Thursday. The previous night - interim UNC coach Everett Withers had gone on local radio and declared that UNC was "THE flagship school" of North Carolina and had more rigid academics than their opponent that week, NC State. This, it turns out, did not sit well with ole TOB.

I distinctly remember telling our then sports reporter Jen Daniels and sports photog Charlie Mickens that we needed to go to every media availability for either team that week because there just seemed to be something in the water. On Thursday, that plan paid off as we had the only camera on-hand as TOB brought out his flamethrower and aimed it at Chapel Hill. The vision of vigorously nodding Mark Thomas over his shoulder never ceases to make me chuckle:

TOB got the last laugh as the Wolfpack blanked the Tar Heels, 13-0.


You can probably guess where I'm going with No. 1 - and yes - you are correct.

1. 2012 - Chapel Hill. THEY KICKED IT TO GIO. The additional beauty here being of course that walk-on WR Roy Smith was supposed to return the punt, but Gio decided the moment called for his magic. He waved Smith off and the rest is history.

Sidenote: Carolina was a 7.5 favorite that day. Gio's TD and the ensuing 2-point conversion meant they won by 8. Glorious.

2012: Gio Bernard takes the punt return to the house.