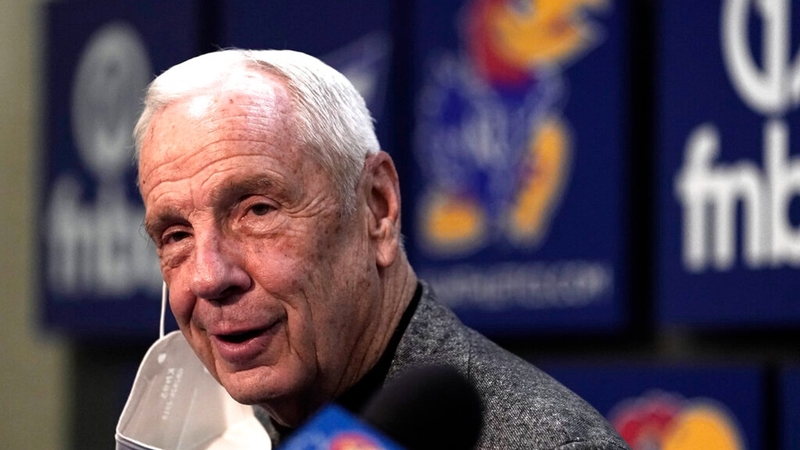 UNC came into the NCAA tournament with few expectations. The Heels were an 8 seed that just weeks before the tournament were not even assured a berth into the big dance.

For all that was made this year of Coach Mike Krzyzewski's retirement tour, the championship game is a sort of retirement party for Roy Williams, who retired as UNC head coach on April 1, 2021.

WATCH: Coach K arrives back in Durham and heads into retirement after tough loss to UNC
EMBED More News Videos

It is an end of an era at Duke University. Duke coach Mike Krzyzewski coached the last game of his career after 42 seasons with the team, and while it didn't end the way fans hoped, his fans say this loss will not define Coach K.

Williams made his name as an assistant coach under Dean Smith at UNC, but he then went out on his own as head coach at Smith's alma mater: the University of Kansas.
In 2003, Williams returned to his own alma mater and led the Tar Heels back to basketball dominance with five Final Fours and three national championships.

In addition, Williams' hand-picked protégé--who played basketball under Dean Smith--is now at the helm of the UNC basketball program. Coach Hubert Davis is looking to be the second coach to ever win a men's basketball national title in their first year as a head coach. Steve Fisher accomplished that task at Michigan in the 1988-89 season.

In fact, you can't really tell the story of basketball without Kansas and North Carolina.

The story of basketball begins with its invention by James Naismith who reportedly tacked up peach baskets at created the game at a YMCA in Massachusetts. Naismith himself founded the basketball program at the University of Kansas, becoming its first ever head coach.

One of the assistant coaches and disciples of Naismith was Forrest "Phog" Allen. He eventually took over as head coach at Kansas where one of his players, a young man named Dean Smith, helped deliver him a national championship before beginning his own coaching career at North Carolina.

Smith would become a Tar Heels' legend during his tenure in Chapel Hill, leading North Carolina to a pair of national championships. And one of his disciples, that dadgum Roy Williams, would not only lead the Jayhawks to four Final Fours but the Tar Heels to three titles of his own.

On and on it goes, the ties binding two of college basketball's bluebloods forming a rich tapestry over time, and another layer to come Monday night when the schools square off for the national championship at the Superdome.

"Both teams are as blue as you can get when you talk about bluebloods," said Kansas coach Bill Self, whose Jayhawks are chasing a third national championship. "But to play a Carolina program that's intertwined with Kansas history, in large part because Coach Smith played at Kansas and won a national championship in '52 and then he goes on and is thought to be as good a basketball coach that's ever coached the sport over a period of time - I think that's special. "

Self has his own ties to the Tar Heels.

He was just an eager young college student trying to make a buck as a camp counselor at Kansas in the early 1980s when he caught the eyes of the Jayhawks' coach. It turned out to be Larry Brown, who two decades earlier had played for Smith and the Tar Heels before embarking on his own coaching career as an assistant in Chapel Hill.

"So I'm very proud to be a part of this game," Self said.

So is his North Carolina counterpart, Hubert Davis, who also played for Smith in the late 1980s and early '90s. After his own college career, and more than a decade spent in the NBA, Davis returned to North Carolina as Williams' assistant, then was picked to take over the Tar Heels when the Hall of Fame coach retired last spring.

Davis ruefully remembers playing against Williams and the Jayhawks in the 1991 national semifinals, when he went 9 of 16 from the field and scored 25 points in a losing effort. Kansas later lost to Duke in the title game.

"Prior to us winning the national championship in 2017, from 1991 to 2017, I had watched that game at least once every year. It was the best team I ever played with," Davis recalled Sunday. "And we really felt like we had a chance to win the national championship and we came up short. And that was a game that Coach Smith got two technical fouls and got kicked out, and it was an emotional game and an emotional end to a season."

Davis still considers that 79-73 defeat in Indianapolis "the toughest loss that I've ever experienced in my entire life."

"And playing at Carolina, the thing, for me, that I always wanted was to cut down those nets as a player," he said, "and we were so close and weren't able to be able to have that experience."

Davis ultimately had that experience as an assistant coach, though never at the Jayhawks' expense. Kansas has won four of their six meetings in the NCAA Tournament, including a second-round matchup in 2013 with Davis in his first year on the Tar Heels' bench.

And then there's Williams, who retired a year ago Friday after a Hall of Fame career. His first 15 seasons came at Kansas, along with a very famous "no thanks" when his alma mater first came calling for him to come home in 2000.

Three years later, Williams couldn't disappoint Smith a second time and returned to save a program in turmoil. He spent the next 18 seasons in Chapel Hill and claimed the national titles that had eluded him in his stellar tenure in Lawrence.

"I loved it, loved the people, loved the players, loved Allen Fieldhouse, and I wanted them to win every single game," Williams said. "But (Monday) night's a little different."

He's been attending UNC games all season to support Davis and his former players after "pushing so hard" for Davis to be his successor. That includes Saturday's win against Duke here at the Superdome.

"I've seen people on Bourbon Street and they say "Rock Chalk!" and I'll say, 'Go KU" because that is my love for that school, and that'll never change," Williams said. "But it's a different story tomorrow night, and it's an uncomfortable one for me.

"But at the same time, the connections with Coach Smith and myself and KU and the relationship we've had over the years between those two great basketball program is something that's extremely special. And Roy Williams is extremely flattered to say that I was able to coach at both schools."

Despite their intertwined history and all the games they have played - 6,394 to be exact - Monday night will be just the 12th meeting between them. This will be the sixth postseason meeting to come in a regional final or later.

By comparison, the Jayhawks have played Kentucky 34 times.

The first meeting between the Tar Heels and Jayhawks was a triple-overtime NCAA title game in 1957, with UNC capping an unbeaten season by outlasting Wilt Chamberlain and Kansas 54-53. After Davis' painful loss in '91, the Tar Heels won a rematch in the national semifinals on the way to Smith's second championship.

But the Jayhawks have won the past three meetings, all in the tournament, most notably in the 2008 Final Four on the way to Self's lone national title.

Most of the players that ultimately will decide the latest showdown between the historic programs know only of the past through stories and memories. Some of them weren't even born when Williams was coaching at Kansas, let alone Davis playing for the Tar Heels, and it's been up to their coaches to instill upon them the importance of this moment.

Kansas and North Carolina for the national championship.

"I've told them this: The best experience that I have had as a player, hands down, was going to the Final Four," Davis said. "I told them, 'I played 12 years in the NBA and that was my finest as a basketball player, finest moment, just being part of the Final Four.' I was trying to convey to them how special it is to be here. Now that they're being able to experience it is great."