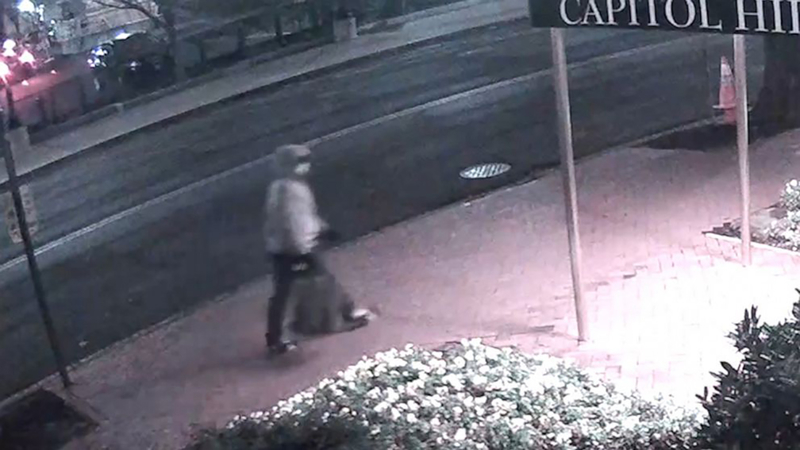 Newly released video shows what the FBI says is the suspected bomber walking with a backpack and carrying what investigators believe are pipe bombs to their targets.

At 7:40 p.m. on Jan. 5, the suspected bomber is seen standing in a residential neighborhood on South Capitol Street with the bag, which is briefly set on the ground as a man walking his dog passes by.

At 7:52 p.m., the person can be seen seated on a bench in front of the DNC, where the first pipe bomb was reportedly placed under a bush. The suspect appears to zip up a bag, stand up and walk away.

At 8:14 p.m., the suspected bomber is seen in an alley near the RNC, where a second pipe bomb was found. Moments later, a security camera captures the suspect walking in front of the Capitol Hill Club, adjacent to the RNC and less than half a block from the Cannon House Office Building.

"These pipe bombs were viable devices that could have been detonated, resulting in serious injury or death. We need the public's help to identify the individual responsible for placing these pipe bombs to ensure they will not harm themselves or anyone else," the FBI's assistant director in charge of the Washington Field Office said in statement.

The FBI also released a new wanted poster with images of the suspect and the distinctive Nike "Air Max Speed Turf" shoes with a yellow swoosh they wore.

"We still believe there is someone out there who has information they may not have realized was significant until now," D'Antuono said. "We know it can be a difficult decision to report information about family or friends -- but this is about protecting human life."

In addition to the suspect's shoes and clothing, the FBI is asking the public to consider whether anyone they know may have exhibited a recent interest in making explosive black powder or may have purchased any of the components of the bomb, including the white kitchen timers used in constructing the devices.
The videos also show the suspect's manner of walking, or gait, which investigators hope someone may recognize. It remains unclear if the suspect is a man or a woman.

According to Scott Sweetow, a retired Bureau of Alcohol, Tobacco, Firearms and Explosives deputy assistant director and former acting director of the FBI's Terrorist Explosive Device Analytical Center, the push for the public's help is a likely indication that the forensic evidence was of limited value.

"There has been an ample period to develop the forensics -- at this point the DNA and latent fingerprints -- which very often solve the crime," Sweetow told ABC News.

"When you don't see an arrest and when you see the reward ratcheting up over the weeks that implies that there needs to be another break in the case -- hopefully a member of the public coming forward when they see the reward or the additional images, released and it jogs their memory so they then come forward to either ATF or FBI with some good usable information."

A reward for information leading to the arrest of a suspect stands at $100,000.