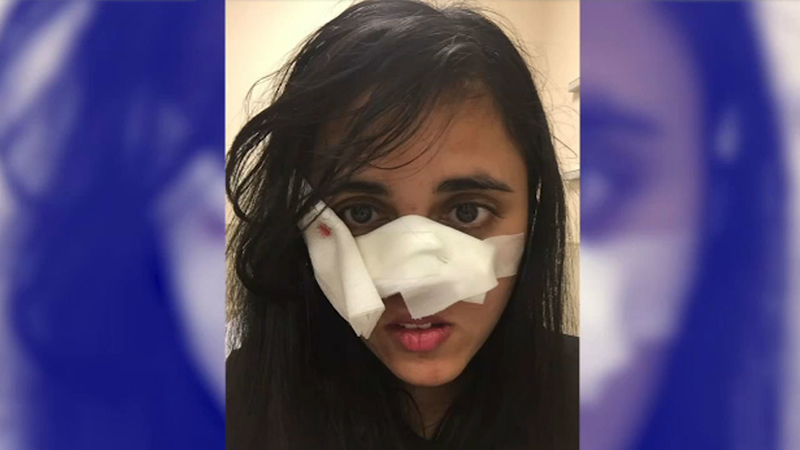 EAST HARLEM, Manhattan -- A 26-year-old woman from Queens is recovering after she was slashed in the face on a Bronx-bound 6 train Sunday afternoon.

The incident happened as the victim was riding northbound through East Harlem, approaching the 138th Street Station, around 1 p.m.

"I noticed someone walking slowly, coming from my left, but I didn't think anything of it," Nadia Kashem said.

Kashem, a law school student at Fordham, was sitting down, protectively holding her purse, when a man suddenly tried to grab her bag. She fought back by holding on and was eventually pulled up from her seat before falling to the subway floor.

The attacker then punched her in the face and slashed her with some kind of weapon. She didn't even know she had been cut until she sat back down inside the train after the suspect fled.

"It wasn't until I looked down and saw the blood, the splatter on my bag," she said. "And when I opened my bag, it was kind of like dripping down my face and all over my hands."

Passengers eventually came to her aid, helping wipe up the blood and calling 911.

"I felt quite angry because he didn't attack any of the male passengers," Kashem said. "He obviously figured as a woman I must be an easy target, and I think that's just wrong. And I hope that the justice system finds him and he gets what's coming to him."

She was taken to Lincoln Hospital, where she was treated and released.

"Don't be afraid of making eye contact with people, because he probably noticed I didn't look at him," she said. "And that's why he probably took the chance."

The suspect, described as a Hispanic male wearing black and yellow sneakers, fled the scene in an unknown direction.

"I'm hoping that person or other slashers will think twice before hitting someone else and thinking they can get away with it," Kashem said.