WTVD
By Andrea Blanford
ANGIER, N.C. (WTVD) -- One of four cyclists hurt Saturday when a car plowed into the back of their group is disputing the account of what happened from the driver that hit him.

Lawrence is still recovering from some bruised ribs, scrapes, and injuries he described as minor compared to his friends'. He was able to walk to the ambulance after the crash.

Fellow cyclist Chris Graham, 34, was also treated and released from WakeMed with a broken leg and other injuries. But two others in the group were not so lucky. Lawrence said Lynn Lashley, 57, has had surgery and Mike Dayton, 60, is still unconscious. They both reportedly suffered head injuries.

Williams, the driver that hit them, spoke with ABC11 soon after the crash.

"It happened so quick," said Williams, as she was sobbing on the side of the road.

Driver, "It happened so quick." 4 cyclists at WakeMed now after being hit on JoCo Rd. 2 victims have head injuries pic.twitter.com/1IqACA9Tpf

Williams told ABC11 that when she saw the cyclists there was another car coming in the opposite direction and there wasn't room to move over.

But in a phone interview with ABC11 Monday, Lawrence said he didn't recall a second car coming toward them when he and the other cyclists were hit.

"We were hit from behind, so what you typically do is you hear the noise of the car passing you," Lawrence explained. "And I use a mirror and a lot of times look back - sometimes they're quiet. And I do not remember- and I don't know if it's just because of the event or whatever- do not remember hearing the car. And I don't remember a car coming toward us either. That's what the driver said- there was a car coming toward and she couldn't get around us. And I don't know why she couldn't put on the brakes or avoid us the other way."

Authorities said the four cyclists were riding in a single-file line. Lawrence said they were also wearing reflective gear - making them even more visible.

The Highway Patrol is consulting with the Johnston County District Attorney's Office on possible charges against Williams. Troopers said alcohol and speed were not factors and has ruled out texting as a factor as well. 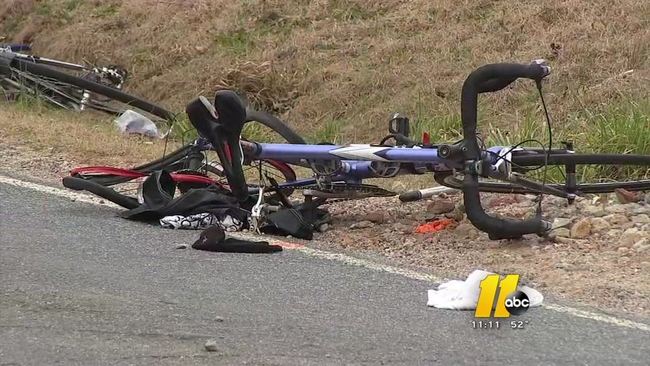