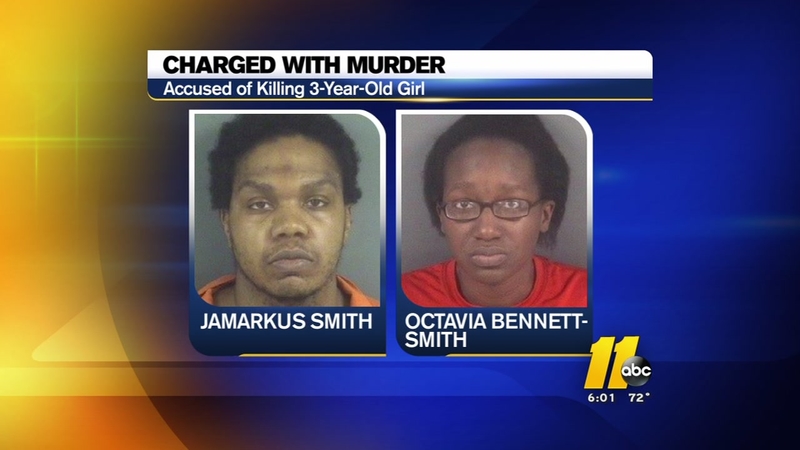 FAYETTEVILLE (WTVD) -- A Fayetteville soldier and her husband are now facing murder charges in the death of their 3-year-old daughter.

Authorities said the couple was responsible for the bruising injuries found on the toddler.

Read more about the case here.

Upon receiving the Medical Examiner's autopsy report, detectives ruled the death a homicide. Detectives served the warrant to Jamarkus Smith in the Cumberland County Detention Center, where he has remained on a $3 million bond since his initial arrest.

Jamarkus Smith is facing additional sex-abuse charges in the case. He has been charged with two counts of indecent liberties with a child and two counts of statutory sex offense. The latter carries maximum life sentences upon conviction. Now facing a first-degree murder charge, Jamarkus Smith is being held without bond.

Bennett-Smith was arrested without incident at her residence, police said. She is being held at the Cumberland County Detention Center without bond.

Cumberland County District Attorney Billy West is awaiting the results of a case re-opened by Fayetteville police, in which the agency is taking a look at the death of the Smiths' second child. In 2014, the baby died of Sudden Infant Death Syndrome, or SIDS.