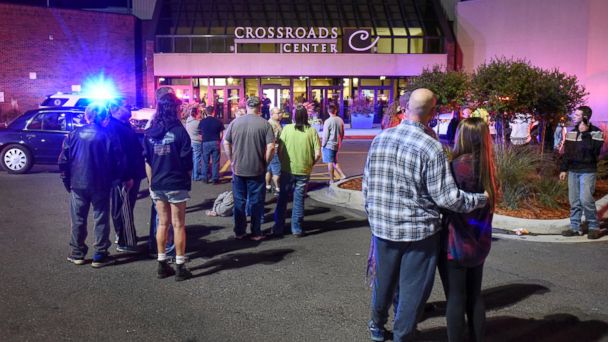 The FBI is looking at the stabbing attack at a mall in St. Cloud, Minnesota, as possible terrorism, authorities said Saturday, as ISIS claims responsibility for the violence that left nine people injured.

"We are currently investigating this as a potential act of terrorism, and I do say 'potential,'" said FBI agent Richard Thornton of the bureau's Minneapolis office at a Saturday press conference.

Thompson said investigators are looking at all aspects of the life of the suspect, who has yet to be identified and who was shot and killed at the scene by an off-duty police officer, to determine his motives and whether there is a link to terrorism.

"We will try to peel back the onion to find out what motivated this individual to commit the horrific act that he did," Thornton said.

ISIS has claimed responsibility for the attack by the man, who was wearing a security guard's uniform when he stabbed people at the mall at about 8 p.m. on Saturday night.

The attacker was "a soldier of the Islamic State" who carried out the attack in response to ISIS calls for violence against civilians, according to a news agency, Rasd, operated by the Islamic State group.

ISIS has used similar language following incidents in which the group did not have prior knowledge or any kind of direct connection to the attack, and it is unclear how the organization may have been linked to the event in Minnesota.

Authorities said the assailant in the mall attack is reported to have mentioned Allah and to have asked at least one of his victims if he or she was Muslim.

St. Cloud police initially reported eight victims, but said Saturday that a ninth person went to the hospital on their own. None of the victims suffered life-threatening wounds, and all but three of those injured were released by early Saturday afternoon, authorities said.

The suspect was killed by an off-duty, part-time police officer from nearby Avon, Minnesota, who happened to be at the mall at the time, St. Cloud officials said.

"He clearly prevented additional injuries and potentially loss of life," Kleis said. "Clearly, Officer Falconer was there at the right time and the right place."

The attack occurred at the Crossroads Center in St. Cloud, a city of about 65,000 people 60 miles northwest of Minneapolis.

Chief Anderson said the suspect was not an employee at the mall and that police had had previous encounters with him, mostly for minor traffic violations. He said authorities have no reason to believe anyone else was involved in the attack. The FBI is helping with the investigation.

"The entire mall is an active crime scene," Anderson said.

The St. Cloud mall remained on lockdown following the attack, and authorities eventually released those inside. It was closed on Sunday.

Minnesota Sen. Amy Klobuchar in a statement Sunday said the community's "feeling of safety was greatly shaken when an assailant stabbed eight people at the Crossroads Center Mall in St. Cloud. I have visited the mall many times, and I can't imagine the horror experienced by those visiting and working there. My heart goes out to the victims and all those who were there last night," she said.

"Over the next few days we will learn the facts. But today there is one thing we all share: We are thankful for the bravery of the off-duty officer and first responders who went beyond the call of duty to save lives."

Photos and video of the mall taken hours after the incident showed groups of shoppers waiting to be released, including some huddled together near a food court entrance.

Harley and Tama Exsted, of Isle, were in St. Cloud to watch their son play in a college golf tournament and were in the mall when the attack happened.

"All of a sudden I heard pop, pop, pop," Harley Exsted told the St. Cloud Times. "I thought someone tipped over a shelf. All of a sudden these people started running. I just saw everybody running our way."

The couple were unharmed and said they helped another woman who was running from the scene to her car.

Adonis Samuels, 42, of St. Cloud, was outside the mall where his wife Roxanne works as a manager at Clinique at Macy's.

"She called me on the phone and told me she was hiding under the counter with a customer," Samuels said. She later called and said she was safe in a secured area.

Samuels remained outside, watching for her. He said he'd seen her through the glass doors at one point so he knew she was safe.