Female Priests Persevere Despite Being Banned From Catholic Church 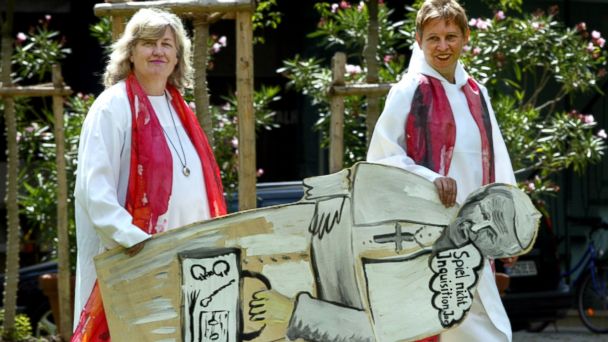 At the end of Catholic Mass, there is often a prayer for new vocations into the priesthood. A group that has been gaining global momentum may be an answer to that prayer but the Catholic Church is not ready for it.

This new breed of priests is not blessed by the Vatican because they are women.

They say they are ordained and despite being excommunicated, they won't abandon their faith.

While women are not welcome in the church to serve as members of the clergy, those who consider themselves priests still see themselves as fully ordained.

In 2002, a Catholic Bishop in Europe -- no longer recognized by the church -- ordained female priests without the blessing of the Vatican, who became known as the "Danube Seven." Because other ordinations have followed from this line of succession, these women see themselves as ordained.

The former pontiff spoke out about the issue of female priests and how it is a transgression against the teachings of the Catholic Church.

As recently as last spring, Pope Francis reiterated the Church's stand on female priests with a firm "no." But he said he would like to see a greater role for women in the church.

One of the women who is defying the edict is Susan Schessler, a member of the Roman Catholic Womenpriests, which stemmed from the Danube Seven.

She joined the Sisters of Saint Dominic as a nun shortly after graduating high school in 1959 and spent 32 years as a teacher and principal ministering to poor neighborhoods in Alabama and New Jersey before leaving the convent.

Then in 2013 she became an ordained a priest by the Roman Catholic Womenpriests, an organization with more than 200 members in 2014, despite a 2008 Vatican decree that all female priests would be automatically excommunicated.

Schessler celebrates mass in an office space in northern New Jersey that a friend allows her to use as a church once a month. She has a small congregation ranging from 8-10 people who attend her service.

Her church is an all-inclusive community that welcomes everyone including divorced and LGBT Catholics. She also has members who were raised Protestant and Jewish. "I've just come to the point where everyone is included," she said. "Christ was inclusive. He didn't question people. First he healed them."

Schessler says that she plans to keep ministering to her congregation.