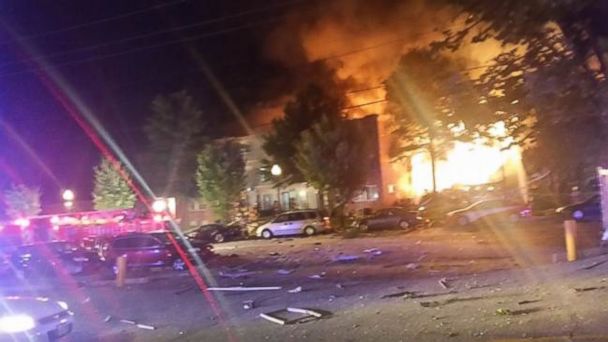 AP
SILVER SPRING, Md. -- Fire officials say 30 people and three firefighters have been injured and five to seven people are unaccounted for after a large fire and collapse at an apartment complex in a Maryland suburb of Washington.

The Montgomery County Fire and Rescue Service reports first responders were dispatched to the scene in Silver Spring just before midnight Wednesday. The department said early Thursday that the fire was believed to be under control.

Spokesman Capt. Oscar Garcia tells The Associated Press none of the injuries are thought to be life-threatening. He says some of the occupants and bystanders reported an explosion. He says county officials are investigating with the Bureau of Alcohol, Tobacco, Firearms and Explosives.

The department tweeted photos that showed a building at least partially collapsed and rubble strewn on the street in front of it.
Related topics:
abc newsnational
Copyright © 2020 by The Associated Press. All Rights Reserved.
More Videos
From CNN Newsource affiliates
TOP STORIES