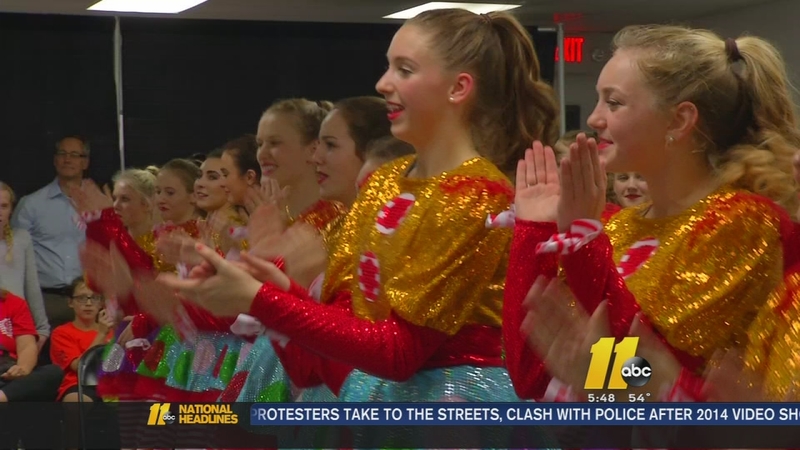 HOLLY SPRINGS N.C. (WTVD) -- For many girls at the Holly Springs School of Dance, it's the moment of a lifetime - dancing in the Macy's Thanks giving Day Parade. The local dance group is ushering in the parade's guest of honor, Santa Claus, and they're the only dance group representing North Carolina.

The girls on the team are all very excited.

"Just the idea of how many people are watching you on television, or live, you know on the streets," dancer Hannah Allen said.

Like most girls on the team, it will be Allen's first time dancing in the Macy's parade, but it's a return trip for three of the school's senior dancers - Ellie Chappell, Emma Kauffman, and Brigitte Kelly.

This will be the fifth time the Holly Springs School of Dance participates in the parade. The school preps dancers to make the trip to New York every three years, since 2003.

The dancers of Holly Springs School of Dance ready to take on NYC! pic.twitter.com/U8QqyjJRrd

Marilyn Chappell is the school's director and the mother of one of the senior dancers, Ellie.

Chappell said the school has been fundraising for the trip since January and they kick practice into high gear as soon as they get their choreography in mid-October.

"The first rehearsal that we all get together for is like a three-hour rehearsal," Chappell said. "We just go through all the choreography and break it down and make sure everybody's on the same page."

The group from Holly Springs School of Dance is the largest private dance group taking part in the parade this year.

The group's returning senior dancers say it's the large crowds along the 60-block parade route they love the most.

"You just hear millions of people clapping and cheering, and it's the most exhilarating thing the whole wide world," Kelly said.

"All of their energy is just so positive and so exciting," Kauffman said.

"I mean you're doing what you love in front of the people you love," Ellie Chappell adds.

Marilyn Chappell says it's the good will and love of the community that's made it all possible and what they'll be thinking of when they take center stage Thursday morning.

"And when we go up, we're representing not just only ourselves, and not just our school, but everybody in this community that has lifted these girls up."
Related topics:
thanksgivingmacy's thanksgiving day parade
Copyright © 2021 WTVD-TV. All Rights Reserved.
TOP STORIES
2 dead in head-on crash on Jones Sausage Road near Garner
4 dead, 159 remain missing after Florida building collapse
Family of missing NC woman begs her husband to speak up
How much could you receive under the new child tax credit?
Derek Chauvin could face decadeslong sentence in George Floyd's murder
UNC students to protest Friday for Nikole Hannah-Jones
'Scary five seconds': Couple recounts bobcat attack
Show More
In Raleigh, Biden encourages vaccinations, warns about Delta variant
Expert weighs in on possible cause of Florida building collapse
LATEST: Flight Day returns to Dix Park
Pet Alert: As dogs roam the yards, snakes may be lurking
Older North Carolinians encourage everyone to get COVID-19 vaccine
More TOP STORIES News