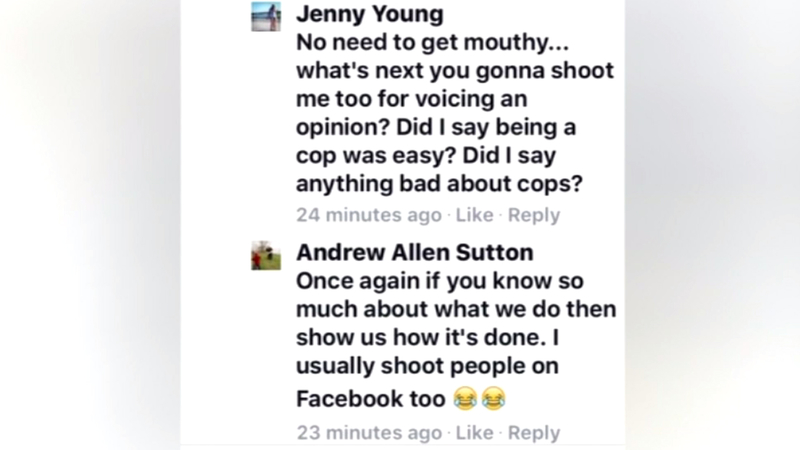 WAYNESVILLE, N.C. -- Following the shootings in Dallas, the Haywood County Sheriff's Office published a Facebook post to say no matter our skin color, we are all brothers and sister. The Sheriff asked people to remember officers are also your community members.

That's the sentiment a lot of people are feeling as the nation calls for unity after this week's violence, but that was not the message from one Haywood County Deputy's social media post.

A viewer told WLOS about an interaction online between a woman and a deputy Thursday morning before the Dallas police shooting. The deputy also commented on the Black Lives Matter movement Friday morning.

The deputy replied to Jenny Young in a thread about the violence. Replying to Young, Haywood County Deputy Andrew Sutton wrote, "Once again if you know so much about what we do then show us how it's done. I usually shoot people on Facebook too."

Later Sutton wrote to Young, "Next time you see the police take cover we shoot for anything."

On Friday morning Sutton wrote, "I hope all the ignorant blind sheep that had so much to say yesterday are happy that so many of my brothers were killed last night in Dallas..."

Sutton's Facebook post continued, "...If you support black lives matter you make me sick and I have nothing for you."

Sutton has been suspended, WLOS reports.

Haynes says the Haywood County Sheriff's Office is always looking to improve its relations with the community.

"We're going to clearly make sure that we protect people regardless of age, sex, race, gender, ethnicity. It makes absolutely no difference. We have a job to do, and we're going to do that to the best of our abilities," said Haynes.

On Tuesday, a sheriff's deputy in Sampson County was fired after making comments on Facebook about a deadly stabbing and shooting at a country club.

Read more about that incident here.