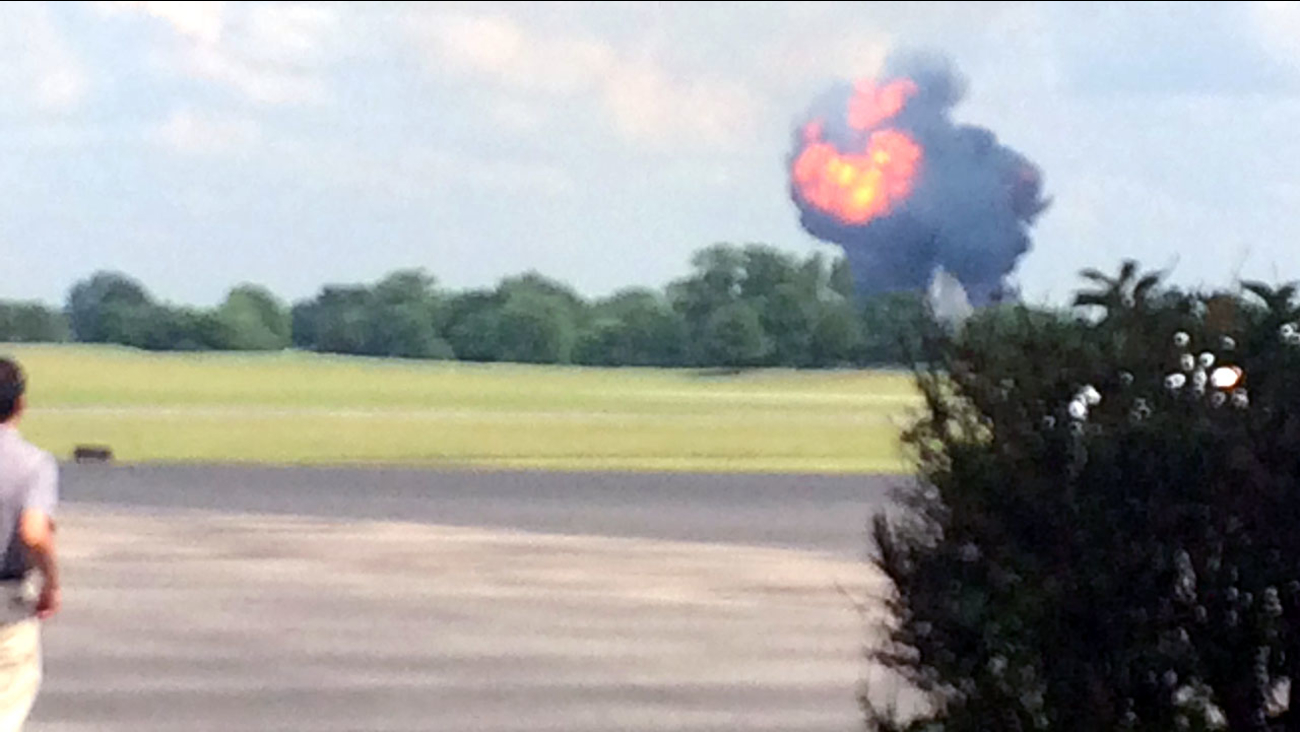 An eyewitness photo of the crash Thursday. (Courtesy of Jackson Johnstone)

SMYRNA, Tenn. (WTVD) -- One person was killed after a U.S. Navy Blue Angels jet crashed Thursday afternoon in Smyrna, Tenn., ahead of their weekend air show at the city's airport.

A La Vergne official confirmed the accident happened around 3 p.m. near Weakly Lane, not far from the bowling alley.

The U.S. Navy confirmed to WKRN that the pilot died in the crash. A U.S. official said the pilot was Marine Capt. Jeff Kuss. The official was not authorized to discuss the matter publicly and spoke on condition of anonymity.

According to his official Blue Angels biography, Kuss joined the elite acrobatics team in 2014 and accumulated more than 1,400 flight hours.

His decorations include the Strike Flight Air Medal, the Navy and Marine Corps Achievement Medal, and various personal and unit awards.

Harry Gill, the town manager in Smyrna just outside Nashville, said Thursday that the pilot was the only casualty and no civilians on the ground were hurt.

DETAILS: Blue Angels were practicing for air show outside Nashville prior to deadly crash. https://t.co/zDC51Z61V6 pic.twitter.com/ufjlKhw6Mx

About 1,300 people were without power after the jet reportedly clipped some power lines during the crash.

Power was restored after about an hour.

Becca Burgess said she had been hearing the jets all day and noticed one was flying particularly low.

"I looked up and saw it coming down and I thought maybe they were doing dips ... Then I saw a huge ball of orange fire, and I'm like, 'Oh my God, he's crashed,'" she explained. "I cried. I mean, the first thought was fear for the pilot."

A U.S. official told The Associated Press that the pilot did not eject.

The Navy says the pilot was beginning to take off during an afternoon practice session when the crash happened. The pilot is not being identified until next of kin are notified. Five other F/A-18 jets landed safely moments later.

"My thoughts and prayers go out to the family and friends of the Blue Angels after this tragic loss. I know that the Navy and Marine Corps Team is with me. We will investigate this accident fully and do all we can to prevent similar incidents in the future," Adm. John Richardson, the Navy's top officer, said in a Facebook post.

Five other F/A-18 jets landed safely moments after the crash.

Kuss was a native of Durango, Colorado, and was commissioned as a 2nd lieutenant in the Marines in 2006. He had previously served in Afghanistan before joining the Blue Angels.

This is the second fighter jet crash of the day for the military's elite fighter jet performance teams. A member of the U.S. Air Force Thunderbirds crashed in Colorado following a flyover for the Air Force Academy graduation where President Barack Obama spoke. That pilot ejected safely into a field.

In Smyrna, retired teacher Brenda Lewis and her 21-year-old grandson had spent much of the day in her back yard near the airport watching the Blue Angels fly overhead.

She's seen them many times before.

"But this afternoon, something made me really want to watch them," she said. "They looked like they were having such a good time playing up there."

She went inside to bake a chocolate pie when she heard a loud boom. She didn't think too much of it at first because the airport is just on the other side of her tree line and she's used to loud noises.

Then she heard sirens and went around the corner. She saw the smoke rising and police cars arriving. She went inside because she didn't want to see any more.

"I'm always so fascinated by them, the anticipation of it all," she said of their airshow. "Then something tragic like this happens. My heart is just broken."

The Smyrna Police Department will continue to assist in the situation, but they are yielding the investigation to the Federal Aviation Administration and the U.S. Military.

The Tennessee Highway Patrol responded to the scene to help direct traffic in the area.

Hunter Hayes was set to fly with the Blue Angels on Friday. His publicist told News 2 the crash happened right in front of them, but he was not injured.

Information from The Associated Press and ABC affiliate WKRN.