Pokemon Go craze hits the Triangle. Here's what you need to know 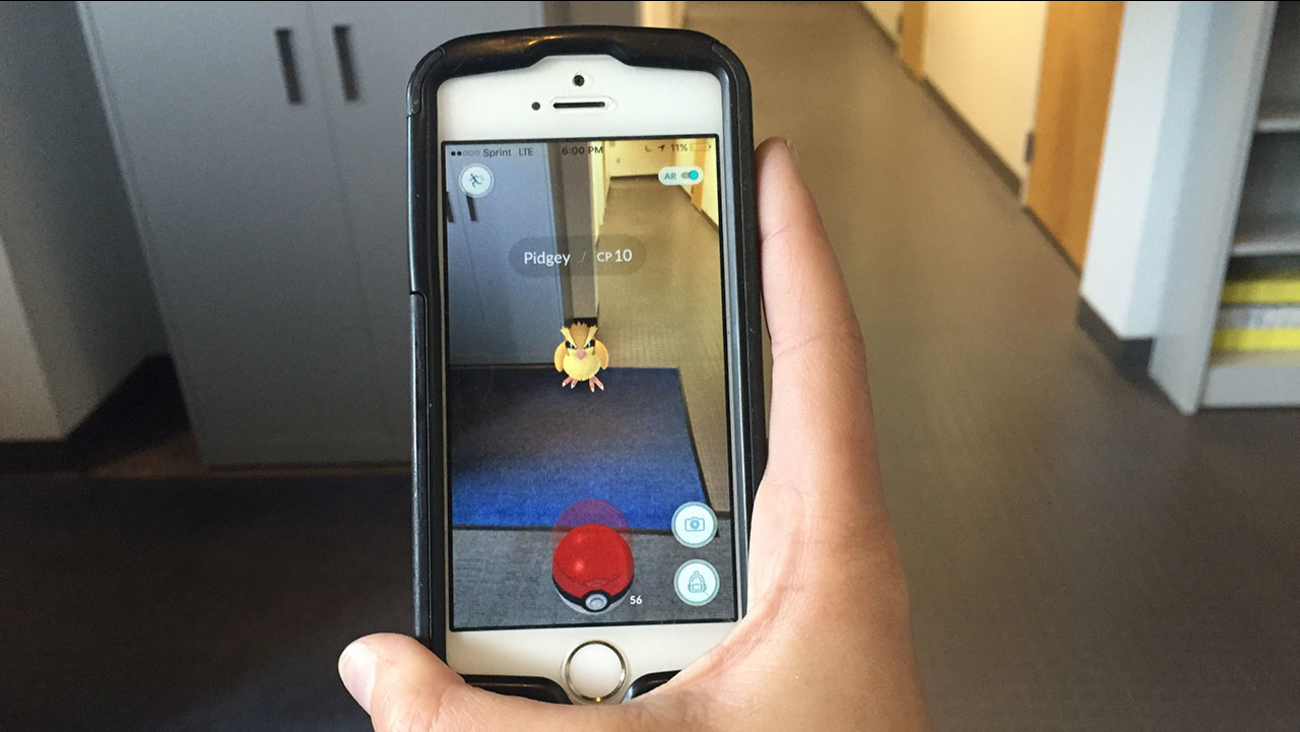 What you need to know about Pokemon Go. (Stephanie Lopez)

DURHAM (WTVD) -- Pokemon Go is the game that's taking over smartphones everywhere. Here's what you need to know about it and what players here in the Triangle are talking about.

Pokemon Go is an augmented reality game that anyone can play through a free app you can download for Apple and Android devices. The game challenges users to walk around and explore in the real world, to find digital Pokemon.

The app uses your phones camera to make it look like there are Pokemon throughout the real world and its how people are taking pictures like these:

Already own an Eevee... guess I'll catch another. #PokemonGO pic.twitter.com/6MR1nJQkaR

Oh God there's a Rattata on my bed! I'm running away #PokemonGO pic.twitter.com/VTo5s2pIwH

The game channels nostalgia for the Pokemon fandom of the early 2000's and is popular among millennials.

"I played the Pokemon games when I was much younger," Jerry Laramay said at a Pokestop in Durham. "I'm 31 now but I started playing in like, 7th grade and I think it's just part of everyone's childhood in our age group."

A Pokestop is an area where players can restock on essential items.

Just spent 30 minutes sitting in the gazebo with 15 other adults playing #PokemonGO and had some wonderful conversations. #NotAshamed

Wish this guy would stop hanging out in my office. I'm working here! #pokemongo pic.twitter.com/oSgomOtRzF

When you catch @ArmstrongABC11 mid hunt for Pokemon at work 😂😂 pic.twitter.com/xoKrxiRxLE

The game is so popular, The Durham Bulls are opening up the field Tuesday from 11 a.m. to 1 p.m. so people can catch the Pokemon that are located on the field.

Tickets for the event are $5 and the money goes to benefit Second Chance Pet Adoptions.

The Bulls said they realized Pokemon were out there when players were walking out while staring at their phones.

JUST ANNOUNCED: #DurhamBulls to Open Ballpark to Fans for #PokemonGO

Folks locally are organizing events around Pokemon Go on a local Reddit thread here and on Facebook here.

The game encourages people to get up and walk around, as people have to go to new places to catch Pokemon, go to Pokestops to get more Pokeballs to keep playing, and go to Pokegyms to battle Pokemon for your team.

Bless you #PokemonGO Thanks to you my son actually wants to meet up with friends and go outside today.

Some Pokemon Go players said they've bonded with others and are enjoying meeting new people through the game.

Gabe Caviness works on Ninth Street in Durham and was playing Pokemon Go while on his lunch break with two other guys named Ian Lipman and Gabe Gorelick.

Caviness had never met the other two before.

"I set a lure during my lunch break so I can catch a few and came up to find these guys," Caviness said.

"Living up on Ninth Street we got the notification, and I saw the purple ribbons and figured it was a good opportunity to catch some, catch them all," Lipman said of himself and his friend Gorelick, referring to the Pokemon slogan "Gotta catch 'em all!"

The game allows players to put out lures to attract Pokemon, but what attracts Pokemon also attracts Pokemon Go players, making players a potential target for crimes like the one that happened in Missouri. Armed robbers used the app to target victims.

Pokemon can crop up all over the place, for those playing the game and have appeared in some people's work places and private property, including their driveways and backyards.

One Twitter user in Cary even said the closest Pokestop to her is at a preschool and that she feels like a "freak" going there several times a day to get more Pokeballs.

3 teenagers just walked by our house holding their phones like Sherlock Holmes, in what I assume was a #pokemon expedition. 2016 is weird.

Law enforcement officers in Virginia have actually taken to Facebook to warn people that the law still applies, even when it comes to Pokemon Go.

Tiffany Dougherty works at a veterinary office in downtown Durham, and she's also concerned about safety when it comes to Pokemon Go and motorists.

#PokemonGO @PokemonGoNews I almost pulled over my car to catch a Pokemon... I'm 26 years old. #NoShame This is addicting though.

Dougherty said her husband encouraged her to play the game for the nostalgia and while she said she thoroughly enjoys it, she hopes people are using it as an opportunity to walk their neighborhoods.

"Pokestops, you can just walk to them rather than having to drive," Dougherty said. "I feel like driving and trying to get Pokestops and Pokemon is really dangerous, and it worries me to think about people driving around and like potentially hitting other people trying to play Pokemon Go."

Check out other local Tweets on Pokemon Go and Pokestops here:

There is a Pokestop at my dorm oh my gosh

My office building is a Pokestop. Aka my company has set a clever trap to see who isn't working.

Anyone captured any #Pokemon at the Fairgrounds? We shall be on the search tomorrow! #PokemonGO

Got some new guests in the house today. FYI our building is a pokestop :) pic.twitter.com/lscdBNLIzg

Obsessed yet? We feed off of creative ideas, and this one is great! #PokemonGO #RTC #PokeStop #CreateThings https://t.co/fUlZYzm0RY

THE GAY BAR IS A POKESTOP #Pokemon pic.twitter.com/G0zTXhkVRP

I swear every baptist church is a pokestop. I think this is God working in mysterious ways 🤔

when you have a pokéstop in your backyard pic.twitter.com/E5dPFjjlpO

My new apartment is great - it's nice, cheap, and best of all it has a modern art sculpture in the parking lot that's a PokeStop #PokemonGO

@naturalsciences has natural and virtual biodiversity in the house now with #PokemonGO pic.twitter.com/IJk7RsulUB

Something really weird watching people wander public places staring at phones not communicating at all but playing the same game. #PokemonGO

I've seen so many families, couples and groups of friends playing #PokemonGo this weekend. Great to see people out and interacting