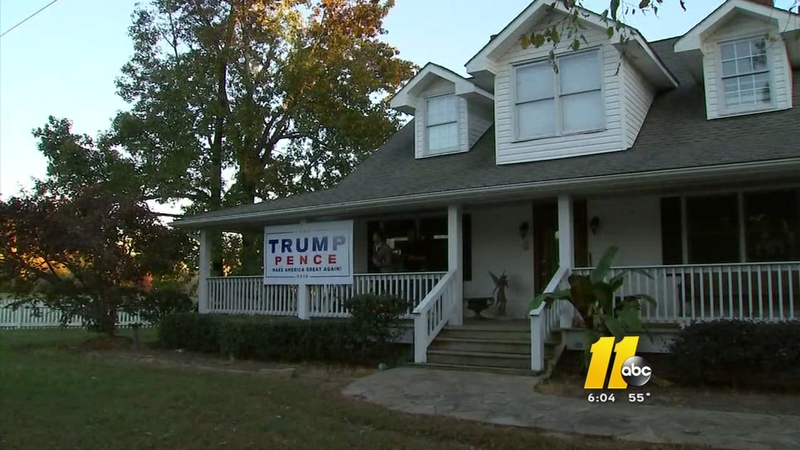 CARY, N.C. (WTVD) -- Police are investigating after someone fired shots into a house in Cary and the Trump sign outside Saturday night. Officers said a BB gun was used.

James Powers, the homeowner, spoke to ABC11 saying he's hurt that someone had the audacity to do that to his Trump-Pence sign in front of his home off Carpenter Road.

"You have to think about, that's an evasion of my freedom. I've done nothing to anybody else. Nothing," he said.

He discovered what happened after coming from dinner.

On Sunday, Powers showed the damage to our crew on the scene, pointing out the numerous holes and shattered glass.

He said he's thankful his children and granddaughter were not home.

"It really didn't resonate until this happened that she plays here," he explained.

While police search for a suspect, Powers told ABC11 he is keeping his sign up. He said he's already voted and he doesn't want this violence to intimidate voters.

"If there is anything missing in this country, it's consequences to behavior. People need to think about what they are doing. Who it affects and what it affects," he said.

Powers has insurance and will be getting his home fixed. He said this is the second time in two weeks his signs have been targeted. Police are investigating after a previous sign of his was set on fire.