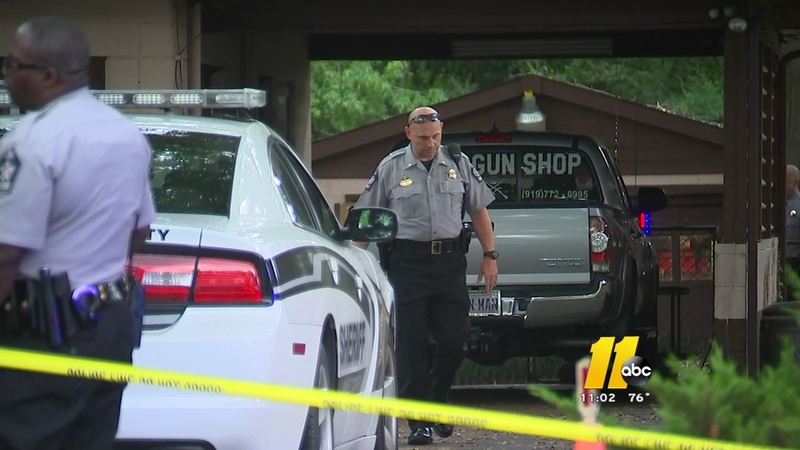 The call went out as a possible robbery with shots fired at Jim's Gun Shop right on the Raleigh/Garner line close to Timber Drive.

It happened shortly after 4:30 p.m., Wake County Sheriff Donnie Harrison said. At the time of the incident, there was an employee and one customer in the shop. The employee noticed two suspects approaching with white masks on and attempted to shut and lock the entrance of the shop, the sheriff said.

Before he could get the door closed, the suspects got to the door and pushed until they entered the store. The employee drew a weapon and fired once at the suspects, causing them to turn and run away. They jumped into a green car and drove off.

The employee told law officers he wasn't sure whether he hit either suspect.

Meantime, Garner Police are still looking for a suspect who they say crashed a stolen car into a pawn shop on Sunday morning.

It happened just after 5 a.m. at the Arrow Pawn on Highway 70, which is less than two miles from Jim's Gun Shop. Police believe the car was stolen somewhere near Holly Springs. At last check the pawn shop owner did not report anything as stolen.

The Wake County Sheriff said they are talking to Garner Police for any possible connections between the two crimes.

No one was hurt in either crime.

It happened at Arrow Pawn on Highway 70

Pat McCrory announces bid for US Senate
Practically everything is getting more expensive in America
US recommends 'pause' for J&J shots in blow to vaccine drive
Expert says ex-cop was justified in pinning down George Floyd: LIVE COVERAGE
What we know about officer who killed Daunte Wright
Show More
US to withdraw all troops from Afghanistan by Sept. 11
'I would get the J&J shot again:' Dr. Cohen says
Former 'Bachelor' Colton Underwood comes out as gay
Lift boat capsizes in rough Gulf waters, multiple people missing
UNC enters first-of-its-kind partnership to help former athletes
More TOP STORIES News