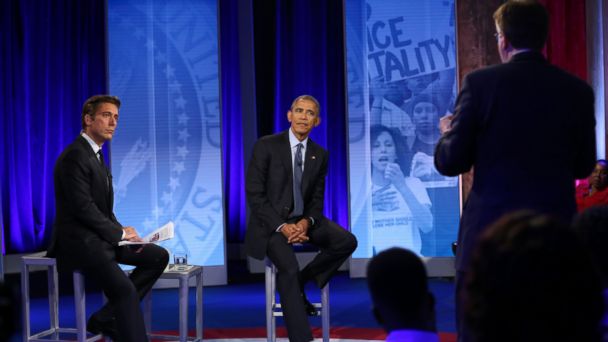 Texas Lt. Gov. Dan Patrick harshly criticized President Barack Obama for what he said was a failure to adequately support police and "protect their lives" while questioning the president's reaction to recent shootings across the nation at a town hall on race relations in America titled "The President and the People: A National Conversation."

"I'm concerned that police officers across the country -- they know you support law enforcement of course, but do they really in their heart feel like you're doing everything you can to protect their lives?" Patrick said to Obama.

The Republican added: "Words matter, your words matter much more than mine. Everything you say matters. And I would ask you to consider being careful when there is an incident of not being too quick to condemn the police without due process and until the facts are known."

The president offered a firm response to Patrick's comments.

"I have been unequivocal in condemning any rhetoric directed at police officers," Obama responded. "So I think, Lt. Gov., you'd have to find ... any message that did not include a very strong support for law enforcement in all my utterances dating back to Ferguson because I rely on law enforcement to protect me and my family, just like everybody else does."

Critics of the president have been upset with comments he made following the shooting deaths last week of two black men by white police officers -- one in Baton Rouge, Louisiana, and another outside St. Paul, Minnesota -- saying he was too quick to judge the cases and did not show enough support for the dangers faced by police. The recent shootings in Dallas, where five police were killed last week, has further heightened these tensions.

But Obama sought to make clear he sees no merit in the charges leveled by Patrick and some other conservatives. He said that while he has been supportive of peaceful protesters across the country, he has made clear he also fully backs the police.

"I have also insisted throughout all these processes that law enforcement is deserving of due process just like everybody else," he said. "No matter how powerful videos may be or what's been said, everybody deserves to be treated fairly by the justice system."

The president said he understands that his words are given great weight when he addresses the country following a mass shooting.