Tens of thousands of women protest Trump across North Carolina 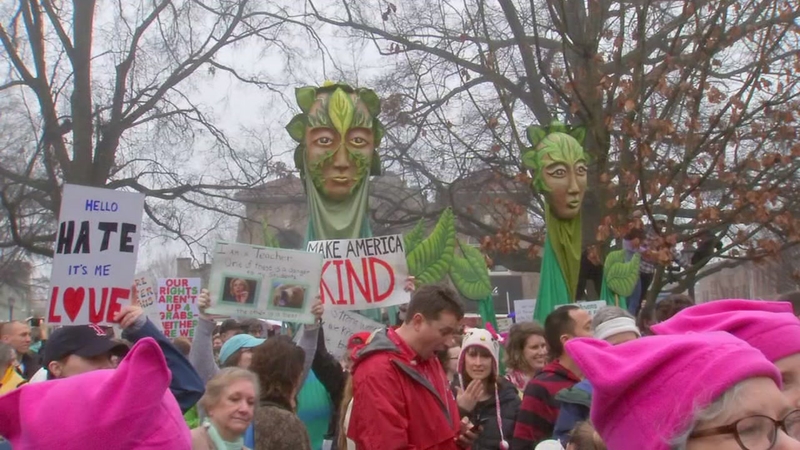 Tens of thousands of women protest in NC

RALEIGH, North Carolina (WTVD) -- Marches and rallies organized by women against President Donald Trump and attacks on women's rights brought bigger crowds than expected across North Carolina as tens of thousands of protesters came to the biggest cities across the state.


The march swelled 17,000 participants in Raleigh, according to event organizers. Authorities estimated more than 10,000 people Raleigh for the protest that police expected to be half that size. Officers had to block extra streets to accommodate the crowds.

"This outpouring is indicative of just how anxious and concerned and committed people are, and I'm greatly heartened by it," exclaimed U.S. Congressman David Price (D).


"We have to support (Trump), he is our president. But we can also make him understand that we have rights and he can't take them away," marcher Cynthia Taves explained.

Many participants worried about their reproductive rights, while others desire economic equality.

"On both sides of the political spectrum, that women's rights are important," Delgado said. "It's important to fight for what's right and what you believe in."

Several thousand people showed up at separate rallies in Charlotte, Greensboro, Wilmington and Asheville. The demonstrations have been generally organized by liberal-leaning women and representatives of groups promoting agendas around government health care, labor rights, gay rights and abortion rights.

Marchers in Charlotte held up signs that read "We Will Not Be Silenced" and "My Body Belongs 2 Me." In Wilmington, signs read "No Hate In My State" and "Women's Rights Are Human Rights." Marchers in Greensboro held up signs with "Respect Works Both Ways" and "We're All God's Children + Equal In Her Sight."

The Women's March on Raleigh occurred on the same day as two Raleigh events promoting the sanctity of life and opposition to abortion. North Carolina Right to Life held its annual march Saturday afternoon, joined by participants in a separate youth event by the Roman Catholic Diocese of Raleigh.

Love my Life rally in Raleigh

The mission statement of the Women's March on Washington says event participants are "hurting and scared" as Donald Trump takes office - and they want a greater voice for women in political life.

Turnout in Washington was so big that the original march route alongside the National Mall was impassable. Instead of trekking en masse to the Ellipse near the White House as planned, protesters were told to head there by way of other streets. And with that, throngs surged in the direction of the White House in a chaotic scene that snarled downtown Washington.

PHOTOS: Women's marches around the country and the world:


The event follows a chaotic day in the nation's capital when protesters set fires and hurled bricks in a series of clashes with police. More than 200 people were arrested.