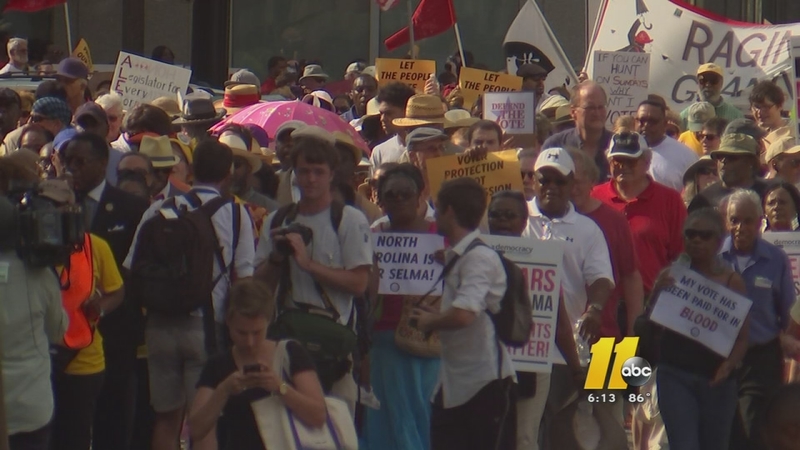 RALEIGH (WTVD) -- A massive crowd in Winston-Salem is now in the middle of a political tug-of-war.

The North Carolina Republican party is doubling down on its accusation that the so-called "Moral Monday Movement" is bought and paid for by out-of-state labor unions.

It's a drum they've been beating for months, but now they say they have proof on video. A man attending the voting rights rally in Winston-Salem, who is a union member, said he and others got money to be there.

For some, that may not be a surprise or a big deal. But to the GOP, it amounts to a smoking gun.

"Sometimes financial constraints are just an issue; the union steps up and supports that issue," said Daren Howell, a member of 1199 SEIU in Boston.


Howell said it to a member of the NCGOP at Monday's massive voting rights rally in Winston-Salem, who was there with microphone and camera interviewing protesters.

"Literally, we walked in and the first person I said, 'Where you from?' and they said New York," said NCGOP spokesman Ricky Diaz. "The unions were bussing them in to protest our voter ID law here in North Carolina."

That's consistent with an allegation Diaz has been pushing for months: that so-called "Moral Monday" rallies are bought and paid for by out-of-state unions.

"This video is further proof that out of state money is funding Moral Monday here," said Diaz.

During the three-minute clip, the NCGOP member holding the microphone asks Howell, "Some people are complaining that the protesters are being paid by unions. What do you think about that?"

Howell answers, "I think the reality is that if you ask anyone whether or not they wanted to be here or if they had to be paid to be here, you'll see that they would be here regardless. Sometimes financial constraints are just an issue. The union steps up and supports that issue."

The interviewer then asks Howell, "How does it work, is that an hourly wage when you come down here? Is that how it works?"

Diaz says that amounts to a smoking gun; proof of the NCGOP assertion that unions are paying protesters to come to North Carolina Moral Monday rallies.

However, the movement's de facto leader, NAACP head Rev. William Barber says the GOP video shows no such thing. He points out that the NAACP invited anyone who wanted to support the cause to go to Winston-Salem for that voting rights rally and says he's not at all surprised people in other states took them up on it.

As for the GOP's broader charge that out-of-state unions are both footing the bill and providing the foot soldiers for Moral Mondays, Barber told us he "won't dignify the accusation." His only comment: "I'm going to pray for them and their shameful attempt to change the subject away from voter suppression. Our fight is in the courts and with the legislature."