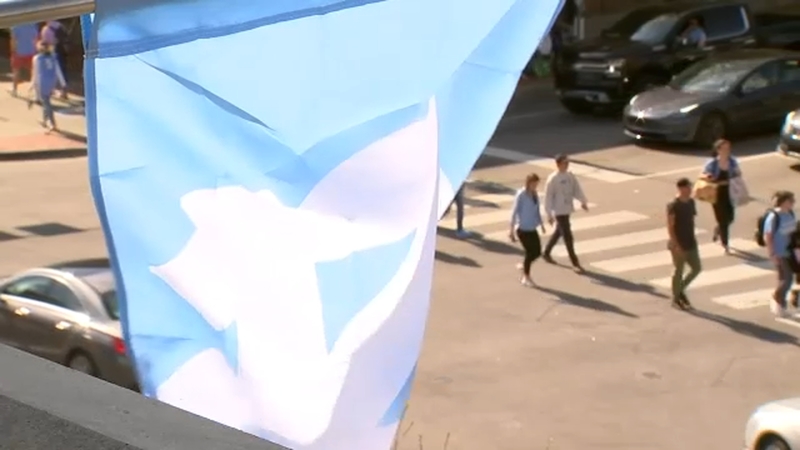 Excitement builds for UNC and fans in Chapel Hill

Carolina fans spread out around the globe will be tuning in to see whether the 8 seed Tar Heels, who just weeks ago were not even sure if they'd make the tournament, can pull off another unexpected win -- this time for the right to hang another banner inside the Dean E. Smith Center.

Inside the Smith Center, thousands of Tar Heel students will be cheering on their team. Then, should Carolina prevail, they will all sprint more than a mile uphill to Franklin Street to celebrate en masse.

Restaurants and bars on Franklin Street are already booked up and some fans were even seen waiting in line Monday morning to make sure they got the perfect spot to enjoy the game.

ABC11 will be there as well bringing you live updates on everything happening throughout the evening.

As for the game itself, North Carolina's top offensive priority, particularly early in a game, is to feed the ball to Armando Bacot in the post. Once the opposing team inevitably starts sending extra defenders at the Tar Heels' big man, Caleb Love has more space to let 3-pointers fly or drive to the basket.

Good luck trying to stop it. No one in the NCAA tournament has yet.

"I've always felt working inside/out is the way for successful offensive basketball and that's the way we're going to do it," North Carolina coach Hubert Davis.

The Jayhawks answer to the Bacot and Love combo is David McCormack and Ochai Agbaji.

North Carolina and Kansas, the last teams standing, have numerous offensive options with multiple players who can put up 30 points any given night.

But the winner of Monday night's national championship game could come down to which team can slow the other's dynamic duo.

Agbaji and McCormack were part of Bill Self's heralded 2018 recruiting class - fifth nationally in the 247 Sports composite - but were far from the headliners. The marquee names in that group were Quentin Grimes and Devon Dotson.

While those two moved on, Agbaji and McCormack remained in Lawrence, honing their games and their confidence to put the Jayhawks on the doorstep of their first national championship since 2008.

The 6-foot-10 McCormack, often called soft early in his career, averaged 10.5 points and 6.9 rebounds while giving Kansas an inside presence opposing teams have to account for. He was a big reason the Jayhawks got past Villanova in the national semifinals Saturday night, finishing with 25 points and nine rebounds.

The 6-5 Agbaji always had explosive athleticism and has worked on his shooting touch, becoming more confident as the years have gone by. He led Kansas with 18.9 points per game this season and has been a difference-maker through most of the NCAA Tournament, including a 21-point game against Villanova.

"I'm extremely happy for these guys and what they've given us," Self said. "They've been great ambassadors and role models for our school and our community. And they both put in the time to give us a chance to be here."

So did Bacot and Love.

Love arrived in Chapel Hill with plenty of accolades: McDonald's All-American, a five-star recruit, Missouri player of the year. The athletic 6-5 guard didn't live up to the expectations that came with it, stumbling through an uneven freshman season.

Love turned a corner as a sophomore, becoming a more confident, multi-level scorer. He's taken a star turn in the NCAA Tournament, scoring 30 points against UCLA in the Sweet 16 and 28 against Duke in the national semifinals.

"One of the many things I love about Caleb is he wants to be on the biggest stage," Davis said. "I've been a part of a number of big-time atmospheres as a player and as a coach. (Saturday) it was right there and that's where Caleb wants to be."

Bacot averaged 9.6 points and 8.2 rebounds as a freshman and has gotten better with each season. Always a good shot blocker and rebounder, he's been a dominant force on the glass while expanding his offensive repertoire.

The 6-10 forward averaged 16.5 points and was third nationally with 13.1 rebounds per game. Bacot grabbed at least 15 rebounds the last four NCAA tournament games, including 22 against Saint Peter's in the Elite Eight and 21 against Duke.

Bacot sprained his right ankle against the Blue Devils, but stayed in the game and is expected to play in Monday's title game.

"It's important that we make sure he stays off the glass, but that's easier said than done because he's such a great rebounder," Kansas big man Mitch Lightfoot said.