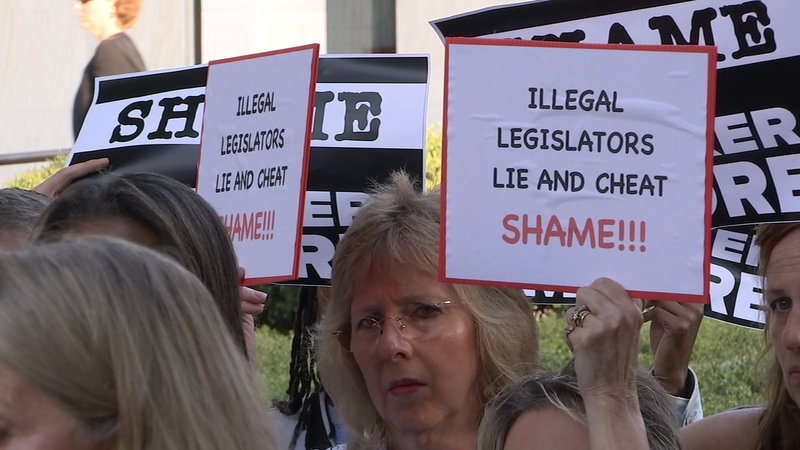 RALEIGH (WTVD) -- A group of protesters rallied outside the North Carolina General Assembly on Thursday morning after Republicans legally, but surprisingly, pushed through a budget veto override.

Politics was the talk of the state Wednesday after Republicans surprisingly passed an override of Gov. Roy Cooper's budget veto. Republicans had kept the override vote on the docket but untouched for months.

I am informed that a rally has grown organically overnight for this morning outside the General Assembly. If you are near Raleigh, NC, join us. #WeWillNotYield

A vote on the override had not been called because Republicans did not have the required number of votes to pass it. However, on the morning of September 11 as the country reflected on the thousands of Americans killed in a terror attack 18 years ago, only 53 percent of representatives were present.

Democrats said they were specifically lied to. They said Republican leaders told them no votes would take place until at least 1 p.m.

However, minutes after the House session began--after only a pledge of allegiance and prayer for 9/11--Rep. Jason Saine (R-Lincolnton) was recognized. He immediately called for a vote on the budget override.

Republicans pushed back against accusations that they lied about intentions of a vote taking place. In fact, they said they'd made it clear that they wanted to override the vote and would do so if and when they thought they had the votes.

The Republican move was undoubtedly legal, but when asked it if was ethical, House Speaker Tim Moore avoided the question.

"What I'll say is this: When we have a calendar, we have business before the body, we're going to vote unless we tell otherwise, and there was no announcement made that we weren't going to vote. You had members who didn't go to things, because they were here to do their job. They came here to do their job, to vote--which is what our job as a House member is--is to be on that floor to be in that seat near that green or that red button when we take up matters."

The budget veto override must still make it through the Senate, but there it faces a smaller hurdle than it did in the House. That's because Republicans only need one Democrat to switch sides to have the required number of votes to pass the override.
Report a correction or typo
Related topics:
politicsraleighbudgetpoliticsnorth carolina news
Copyright © 2022 WTVD-TV. All Rights Reserved.
TOP STORIES
Snow likely to start around midnight, last until sunrise
How many times can I reuse my N95 mask?
10 injured in PA bridge collapse; human chain formed to help | LIVE
Decades after TV anchor disappears, convicted rapist denies connection
Moderna launches trial for HIV vaccine that uses mRNA technology
What is antisemitism? Explaining anti-Jewish ideas and hate
Holocaust survivor, great-grandson educate next generation on TikTok
Show More
LATEST: Breakthrough cases make up 37% of new COVID infections
Essentials to keep in your car during winter storms
Former NCSU footballer Torry Holt named to NC Sports Hall of Fame
Epic Fun Park to open this summer in Fayetteville
'Tiger King' Joe Exotic resentenced to 21 years in prison
More TOP STORIES News