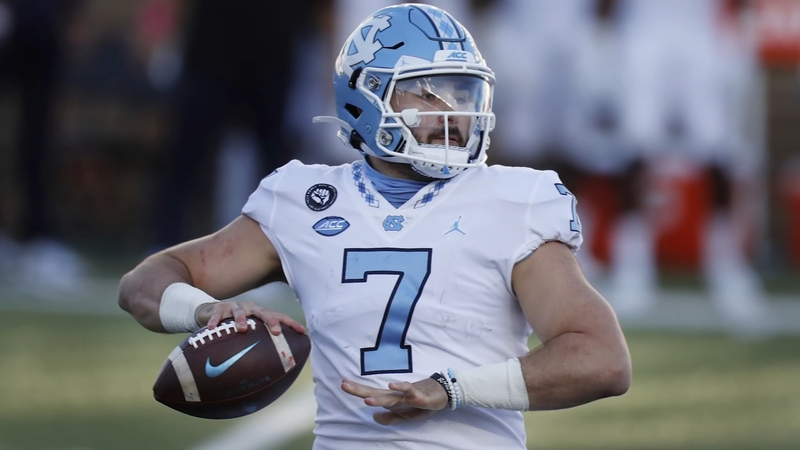 CHAPEL HILL, N.C. (WTVD) -- Mack Brown and Brian Kelly first met back in the 2003 Hula Bowl all-star game. Kelly, then the head coach at Grand Valley State, was an assistant to Mack that day. On Friday they meet again as head coaches in a Top 25 showdown in Chapel Hill. They are now two of the winningest active coaches in the game (Brown is No. 1). Here's what Kelly had to say Monday when asked about the secret of their shared success.

"Not playing each other. That's worked out pretty good," Kelly laughed.

There's no dodging each other Friday. No. 25 UNC at home vs. No. 2 Notre Dame. It is the biggest game to date of Brown's return to Chapel Hill.

"A national game. We wanted to be relevant again, we're ranked and Notre Dame is No. 2 in the country. National TV game," Brown said.

Staying relevant is the trick. A win against the so-far-unbeaten and largely unchallenged Irish would go a long way.

"We definitely realize this is a big opportunity for our team." UNC quarterback Sam Howell said. "A tremendous challenge to play Notre Dame. We know the impact a win like this can have on a program. It's definitely a game we want to win, we're putting in all the work."

Notre Dame isn't stupid. They've watched the Heels play and are well aware of the firepower they're facing in Howell and the Carolina offense.

Irish safety Shaun Crawford is ready to be tested.

"They will take shots and they will do double moves," he said. "And so our corners have just got to stay true and play confident on throughout the game because we have talented corners that can match up against their talent on the outside, and so it'll be a great matchup all game."

"The running back situation is as talented as anybody in the country with Carter and Williams. Williams, I think he's got 18 touchdowns this year. I mean it's just a fabulous offense, extremely well coached," Kelly said.

While the Notre Dame defense has been most impressive, Ian Book and the offense has been a pleasant surprise. The offensive line is elite.

"They've got a very impressive offensive line and a very athletic quarterback." UNC defensive end Tomari Fox said. "So, the biggest thing is just maintaining our gap and maintaining rushing lanes and to be where we're supposed to be."

"Yes. I'm concerned about both," Brown said. "Defensively, they're by far the best team we've played (and on offense) they're gonna line up and just run it right at us, and it's a huge challenge for our guys."