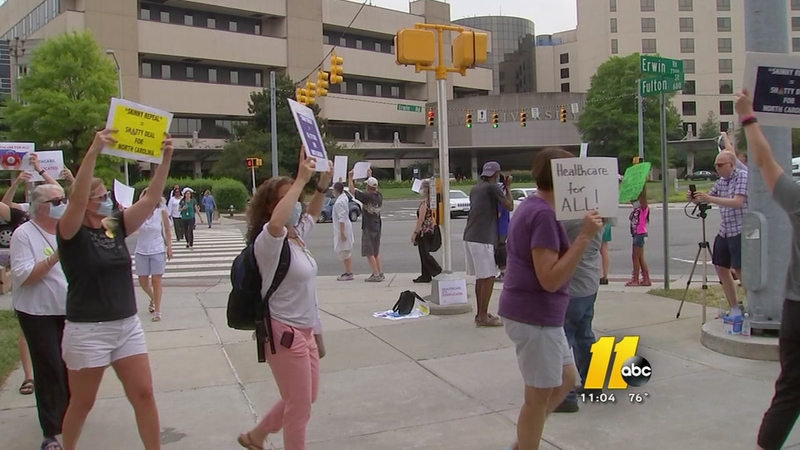 DURHAM, North Carolina (WTVD) -- With Washington still divided on how or whether to repeal Obamacare, protesters took to the streets outside Duke Hospital on Thursday evening.

They chanted, "healthcare for all," as they marched with signs and donned surgical masks with a message to Washington to vote against the repeal - and instead work on fixing what's wrong with the Affordable Care Act.

"This is not to say that the Affordable Care Act is at all perfect in its current form, but what could happen could make it much, much worse," said protest organizer Kelly Garvey.

Among the group was Sarah Whitehall, a life-long asthma patient; and Eunice Chang, a small business owner who is also deaf. They both say they're concerned about a return to the days before the ACA, when a pre-existing condition made buying health insurance nearly impossible.

"My insurance premiums will go up because I already have a pre-existing condition," Chang said.

"I take over $1,000 in prescription medications every single month and for the rest of my life to keep it under control," Whitehall said. "With that pre-existing condition, if I lose my health insurance, I could die."

The nation's largest health insurers got off the sidelines of the intense debate - including the lobbying arm of Blue Cross Blue Shields across the country.

They sent a message to senators warning Republicans against repealing the individual mandate, writing, "A system that allows people to purchase coverage only when they need it drives up costs for everyone."